Bhartu and Westlake to Compete at 2017 Bowls World Cup 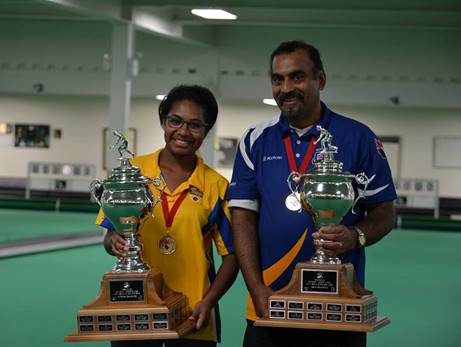 Hirendra Bhartu (Nanaimo, British Columbia) and Pricilla Westlake (Delta, British Columbia) are off to Warilla, Australia to compete at the 2017 World Cup.  This annual singles tournament features competitors from over 20 countries and is played on the indoor greens of the Warilla Bowls and Recreation Club.  The 2017 event is set to begin on March 14th and runs through until March 22nd.

Bhartu and Westlake earned the right to compete in Warilla when they won their 2016 Canadian Indoor Singles Championship titles last November in Vancouver, British Columbia.

Bhartu will be making his fourth appearance at the 2017 World Cup, having represented Canada for three years in a row from 2007-2009. “Every match at Warilla will be tough as everyone there deserves to be there representing their country” stated Bhartu. “I am looking forward to returning after eight years. My goal is to get into the playoffs and then to win it all.”

This is Westlake’s second appearance at the premiere event. The World Cup is the first of two international competitions Westlake will compete in over the next two months.  Westlake, a member of the Canadian Women’s National Squad, will also be representing Canada at the 2017 World Youth Championships in Queensland, Australia from March 27th- April 2nd.  Training two to three times per week at the Pacific Indoor Bowls Club (PIBC) in Vancouver, B.C. has Westlake expecting to excel in both events. “I’m excited to have qualified for both the World Cup and the World Youth Championships two years in a row,” stated Westlake. “This year I hope to finish top two in sectional play in both events.”

Bhartu will be playing in Section 1 of the men’s draw against 13 opponents including Warilla’s own Jeremy Henry who has won this event four times in the last six years. Westlake, who is looking to improve on her bronze medal performance in 2016, will be playing in Section 1 of the women’s draw against 11 other opponents, one of whom is defending champion Carmen Anderson of Norfolk Island. Round robin play will begin on Tuesday March 14th and will continue until Monday March 20th.  Playoffs begin in the afternoon of Monday March 20th, finishing with the finals on Wednesday March 22nd.

For a full list of competitors and the complete draw please visit: http://www.worldbowls.com/event/world-cup-2/