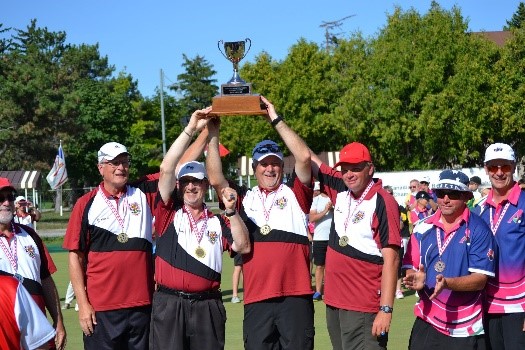 The first half of the 2019 Canadian Lawn Bowling Championships have come to a close at the Burlington Lawn Bowling Club in Burlington, ON. The Pituley brothers, Jonathan and Michael, have reclaimed the Men’s Pairs title while Peggy Plathan and Patricia Walker took home the Women’s Pairs gold medal. The Men’s Fours gold went to Ontario’s Derek McKie, Lyall Mix, Jim Smith, and Everett Zwiers, while the Women’s Fours gold went to Alberta’s Claire Day, Amanda Berg, Jennifer MacDonald, and Val Wilson.

The day began with tie-breakers on the green to determine who would play for gold in both men’s disciplines. At the conclusion of the round robin, there was a 3-way tie for first place in the Men’s Fours. The first tiebreak saw Ontario-B defeat Ontario-A to punch their way through to the gold medal match. In the next tiebreaker, Ontario-A defeated Alberta-B to also advance to the gold medal match. In the gold medal game, it was Ontario-A’s Derek McKie who came up clutch for his team, leading them to a 17-8 victory over Ontario-B. In the bronze medal game, Alberta-A defeated Alberta-B 14-7 to take home the bronze. 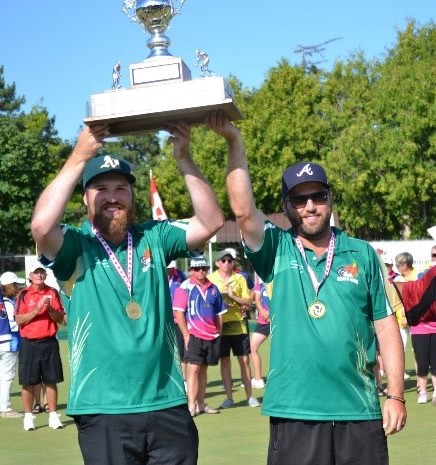 There was a 3-way tie for second place in the Men’s Pairs, which led to tiebreakers on the green as well. The day began with Saskatchewan-A defeating both Ontario teams in back-to-back tiebreaker games; first the Pituley brothers took down Ontario-A in a tight 7-5 game, before dominating Ontario-B with a 12-3 victory. Waiting for them in the gold medal match was Alberta’s Greg Wilson and Derek Dillon. Wilson, formerly a Burlington native, performed admirably in the round robin, leading the Alberta duo to a 8-1 record. However, in the gold medal match, the Pituleys took over the game from the beginning. Racing out to an early lead, Jonathan and Michael never looked back, winning the match by a score of 20-8. In the bronze medal match, Ontario-A defeated Ontario-B 21-11 to secure the bronze medal. 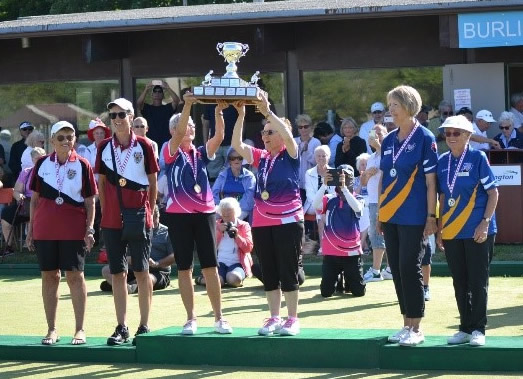 On the women’s side, Alberta and British Columbia both finished with 6-2 records in the Women’s Pairs to advance to the gold medal match. In that final matchup, Alberta’s Plathan and Walker had their way from the get-go, finishing with a score of 26-5. For Plathan and Walker, this was their first medal at the national championships after representing Alberta in the Women’s Fours for five consecutive years. In the bronze medal match, Ontario-A defeated Ontario-B in a nail biter, 18-16.

In the Women’s Fours, British Columbia finished with a 7-1-1 record to sit first in the standings, and faced off against Alberta-A who finished with a 6-3 record. The gold medal match was an exciting back-and-forth battle with excellent shots made from both sides. In the end, it would be Alberta-A that would prevail, winning by a score of 15-9. In the bronze medal match, Manitoba defeated Alberta-B 19-6 to claim the bronze. 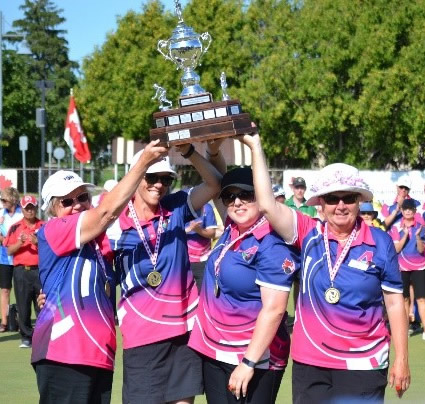 The second half of the event will now move over to the Heritage Greens Lawn Bowling Club in Kitchener, Ontario from August 26-30 for Men’s and Women’s Singles. The event will see 24 men and 24 women seeking to take home the title of national champion. Both the men’s and women’s singles champion will earn the right to represent Canada at the 2020 World Bowls Champion of Champions event being held in Australia.

For standings and results: https://www.bowlscanada.com/en/championship/2019champ_canadian.html