British Columbia native, Pricilla Westlake is going home with a bronze medal from the 2016 World Cup at the Warilla Bowls and Recreation Club (Australia).  Westlake faced Siti Zalina Ahmad (Malaysia) in the semi-final.  A 20-year veteran of the sport, Ahmad is not only this year’s defending champion, but also a two time Commonwealth Games Gold medalist.

At only 20 years of age, Westlake proved that she has what it takes to compete with the best in the world. The young Westlake’s nerves may have played a factor at first when she gave up a four points in the opening end, however, she quickly settled down to business.  Ahmad took the first set 9-8, but Westlake made her work for every shot earned. Westlake started the second set very strong and continued her momentum ultimately taking the set 8-6 to force a tiebreaker.  In the three-end tiebreaker Westlake put Ahmad immediately on the defensive by scoring  three in the first end. 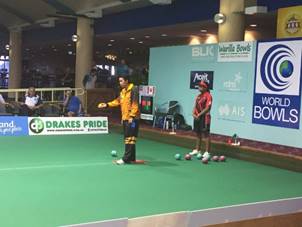 Ahmad’s experience came through for her when, despite Westlake’s best efforts, she closed the gap to a one point differential in the second end.  Westlake had an opportunity to take the match with her final bowl in the last end, however, the precision shot-making that Ahmad is renown for did not give Westlake much to work with and the Malaysian ultimately took match with a final score of 5-3.

Throughout the match, Westlake fought hard against Ahmad going point for point with her right down to the last bowl.  Displaying a poise and maturity beyond her years, Westlake showed the world that she is ready to compete against the best of the best.  Canadians across the world tuned in to watch Westlake’s performance on the live online stream provided by host Bowls Australia.   Westlake will be sharing the bronze medal with semi-finalist Carla Krizanic of Australia.  The British Columbia bowler has made a name for herself on the international circuit and Canadians could not be prouder.

Westlake is now off to the 2016 World Junior Championships where she will be competing against the world’s best junior bowlers from April 9-16 at Broadbeach Bowls Club in Queensland, Australia.

Sanctioned by World Bowls, this indoor singles event is contested annually by nominated representatives from national bowls authorities around the world.   Played at the prestigious Warilla Bowls and Recreation Club, this event is considered as the world international championship for indoor bowls. The format is similar to tennis where two sets of 9 ends are played with each competitor alternatively playing four bowls per end.