Day two of the second half of the 2019 Asia Pacific Championships being held on Gold Coast, Australia is complete. Despite some heavy rains, Canada positioned themselves well for a playoff push.

Ryan Bester (Hanover, ON) won his first round of the day against Singapore 21-4. In round 5, Bester came up against Australia’s Ray Pearse. It was a back-and-forth battle with some flash downpours. With Pearse up 17-14, the skies opened up and play was stopped temporarily. When the greens drained enough to play again, Bester popped a 3 to tie the game 17-17. Pearse quickly responded by taking a 2 and then another 2 to win the game 21-17. In the final round of the day, Bester grabbed a 21-9 victory over Philippines to improve his record to 5-1. Bester sits in 1st place in his pool, however Australia and Malaysia all have the same record. With his last three games against Papua New Guinea, Malaysia, and Norfolk Island, the ball is in Bester’s hand for where he’d like to finish in the standings. His game against Malaysia may determine who finishes 1st in the group. 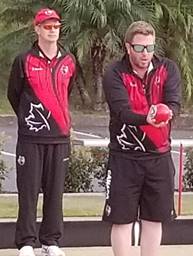 The Canadian crew of Cam Lefresne (Enfield, NS), Greg Wilson (Cochrane, AB), Pat Bird (Calgary, AB), and Rob Law (Winnipeg, MB) started off day 2 with a loss to Thailand 16-9. The Canadians rebounded in round 5 by tying the Philippines 19-19, which included scoring a perfect 8-end. The Canadian crew finished off the day with a 15-9 victory over Samoa. With a record of 4-1-1, Canada sits in 2nd place in their group. In the final three rounds, Canada will face New Zealand, have a bye, and finish off against Malaysia. Both of these games will be difficult, as Malaysia currently sits 1st in the group and New Zealand sits at 3rd. With Thailand knocking on the door to get into the top 3, Canada will likely need to win at least one of their final games, if not both, in order to secure a spot in the playoffs.

In the women’s pairs, Kelly McKerihen (Toronto, ON) and Joanna Cooper (Calgary, AB) won their first game of the day, 16-10 over Japan. The duo kept the momentum going and picked up a win over Macau 18-11 in round 5. In the last game of the day, the pair came up short against India, losing 10-18. With a record of 3-2, the Canadians sit in 5th place in their group. Their last three games come against the Philippines, Malaysia, and New Zealand. All three matches will be difficult, but in order to make it to the playoffs, it is likely that Canada will need to win all three. The final standings will most definitely come down to the final round, as Malaysia (4-1), Fiji (4-1), India (3-3), Canada (3-2) and the Philippines (3-2) all have numerous games against each other in the final three rounds and are all vying for a top 3 finish to advance to the playoffs.

Women’s Triples
Leanne Chinery (Victoria, BC), Jordan Kos (Regina, SK), and Jackie Foster (Bridgetown, NS) started off day 2 in the women’s triples with a 24-11 victory over Niue. The Canadian trio had a slow start against Australia in the following round and couldn’t quite claw their way back in time, losing by a score of 17-8. The Canadians rebounded with a win over Thailand 21-10 to improve their record to 5-1. The Canadian women sit in 2nd place in their group, and will have a bye in round 7, followed by games against Fiji and Malaysia. As long as the trio can win one of those two games and have a good shot differential, they should be able to advance to the playoffs.