The second half of the 2019 Asia Pacific Championships being held on Gold Coast, Australia is underway. Team Canada had a successful first day with only one loss out of 11 games.

Men’s Singles
Ryan Bester (Hanover, ON) won his first round 21-20 against Fiji, followed by a 21-17 victory over India. In the 3rd round, Bester really found his stroke, defeating China 21-1. With a record of 3-0, Bester sits in 2nd place in his pool, just behind Malaysia who is also 3-0. Bester will be in for a tough day 2, with games against Singapore, Australia, and the Philippines. 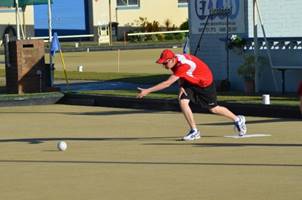 The Canadian crew of Cam LeFresne (Enfield, NS), Greg Wilson (Cochrane, AB), Pat Bird (Calgary, AB), and Rob Law (Winnipeg, MB) got off to a good start in the men’s fours. The Canadians started the fours with a 17-6 victory over Singapore, followed by a decisive 18-8 victory over the USA. The Canadians finished the day with a 15-8 victory over China to give them a record of 3-0 and sit first place in their group. Next up for the men will be Thailand, Philippines, and Samoa.

Women’s Pairs
In the women’s pairs, Kelly McKerihen (Toronto, ON) and Joanna Cooper (Calgary, AB) lost a nail-biter 13-12 against Fiji in the opening round. After having a bye in the second round, the Canadian duo defeated Niue by a score of 24-15. With a record of 1-1, the Canadians sit in 6th place in their group. Day 2 will be a good opportunity for McKerihen and Cooper to move up in the standings, with games against Japan, Macao, and India.

Women’s Triples
Leanne Chinery (Victoria, BC), Jordan Kos (Regina, SK), and Jackie Foster (Bridgetown, NS) started off the women’s triples with a 23-16 victory over Singapore in the opening round. In round 2, the women snuck away with an 18-17 victory over Brunei before finishing the day with a 23-7 win over Samoa. With a record of 3-0, the women sit in first place in their group. The women will have a tough day 2, with games against Niue, Australia, and Thailand.