With five fourth place finishes and one silver medal, the 2018 Gold Coast Commonwealth Games represent a best ever showing for Canadian bowlers. 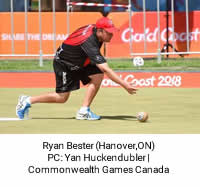 Ryan Bester (Hanover, ON) had his work cut out for him facing home crowd favourite Aaron Wilson of Australia. Not only had Aaron Wilson been based at the Broadbeach Bowls Club for the last few months, but in their last three meetings in competition play, Wilson had come out the victor.

Earlier in the day, Bester dispatched Scotland’s Darren Burnett in the semi-final. These two met in the 2014 Commonwealth Games Singles final where Burnett claimed gold, and this grudge match was anything but boring. Bester got off to an early 10-4 lead, but the Scot was not concerned and grabbed several deuces to fight to at 13-13 tie. Burnett looked like he was going to finish the game by getting within 2 points of the 21-point finish line, but Bester had other plans. Down 19-17, the Canadian scored three ends in a row to win the semifinal 21-19 and advanced to the gold medal game. 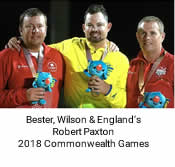 Early in the gold medal game against Wilson, it looked Bester would be able to ride the momentum from his thrilling semi-final victory as he got off to a strong 7-4 start.  However, the momentum swung dramatically when Wilson made a fantastic shot by driving a bare jack to the ditch on his first bowl in the 11th end.  Feeding off the home crowd, Wilson would go on to score in multiples for the next three ends to over-take Bester by a six point lead. A few bad bounces for Bester saw the game slide out of his grasp and Wilson claimed the game and the gold medal in a final score of 21-14.

Women’s Pairs Finish Fourth
The women’s pairs team of Leanne Chinery (Victoria, BC) and Kelly McKerihen (Toronto, ON) battled Scotland’s Lesley Doig and Claire Johnston in the bronze medal match. Scotland skip Johnston started the game on fire, putting McKerihen under pressure no matter how the leads played. Scotland got off to a 10-1 start before Canada finally started to crawl back. After fourteen ends, Canada trailed 14-8, but could not complete the comeback against a very tough Scottish pair. The final score was 18-10 for Scotland.

Best Ever Results
Despite winning the one silver medal in Men’s Singles, this has proven to be the most successful Games ever for Canadian bowls. Reaching the semi-final in 6 out of 8 events, there is a level of depth and consistency that has never been seen before in Canada.  In addition to the Women’s Pairs fourth place finish, Canada saw top results in McKerihen’s fourth in Women’s singles;  a fourth in Women’s Fours where Chinery skipped Pricilla Westlake (Delta, BC), Joanna Cooper (Calgary, AB), and Jackie Foster (Bridgetown, NS); another fourth in Women’s Triples by Westlake, Cooper and Foster; and a fourth in Men’s Triples by Cameron Lefresne (Enfield, NS), Greg Wilson (Calgary, AB) and Chris Stadnyk (Niagara Falls, ON).

When asked about what difference New Zealand native Terry Scott has made to Canada’s coaching ranks, Ryan Bester had this to say: “Terry’s been brilliant. He’s added a lot of professionalism to the team and he’s been really good for us”.  Scott joined the program just over a year ago. At the same time, Canadian Darryl Fitzgerald made the transition from athlete to coach and he has worked closely with Scott to prepare this team for the Gold Coast.  Manager Jean Roney rounded out the support staff on the Gold Coast.

Full results are located on the official Gold Coast website at https://results.gc2018.com/en/lawn-bowls/daily-schedule.htm