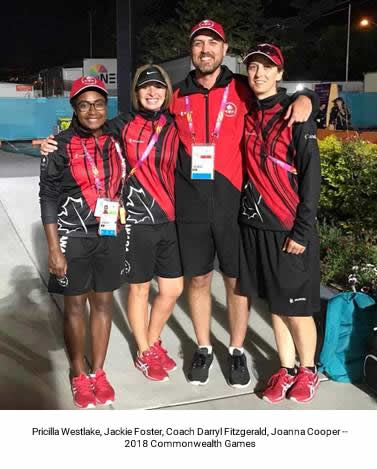 Pricilla Westlake (Delta BC), Joanna Cooper (Calgary, AB) and Jackie Foster (Halifax, NS) faced England in the bronze medal match after the Canadian trio fell to Scotland 19-7 in the semi-final earlier in the day.  Canada faced an uphill battle as England were the heavy favourites with both Skip Sian Honnor and Ellen Falkner having played on the gold medal winning team at the 2014 Commonwealth Games and lead Katherine Rednall having won multiple World Indoor Bowls Singles titles.

England started the match aggressively leaping out in front of the Canadians 10-3 by the seventh end.  Canada settled down in the second half to begin a steady march back.  A couple of big drives from Westlake saw the match all tied up at the 13th end 12-12.  A bit of bad luck for Canada saw England pick up a huge 4 in the fourteenth which changed the momentum of the game yet again.  A big shot from Westlake saved the next end as she cut England down from a potential five to a single.  But the momentum shift proved to be too much as England would pick up another 2 in the sixteenth end to move England ahead 19-12.  The English trio couldn’t put a bowl wrong in the seventeenth end and despite strong play from Canada, England picked up another single to seal the match and the bronze medal with a final score of 20-12. 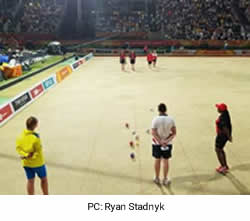 When asked what positives they would take away from their experience, Foster said “we made a mark on the scene here.  People took note of Canada.  In all of our disciplines, I think we have had a great showing and can hold our heads high.”  And this trio has indeed made a mark.  2018 was a year of firsts for this triples team.  The first Commonwealth Games for both Westlake and Cooper, the first time skipping for Westlake, the first major international for Cooper, first time playing in front of massive crowds, first time playing with the distraction of television cameras and equipment, and most importantly, the first time this combination has played together.  This team has had quite a run: finishing second in their pool, defeating powerhouse New Zealand in the quarters, and displaying spectacular pressure shots and tactical play in their semi-final and medal matches to finish 4th in the Commonwealth.  “It’s a privilege to be out there,” said Joanna Cooper.  “We are a new combination and we just kept getting better.  And yeah, we’ll be back.”

Women’s Pairs to Play for Bronze
The women’s pairs team of Leanne Chinery (Victoria, BC) and Kelly McKerihen (Toronto, ON) battled Norfolk Island’s Carmen Anderson and Shae Wilson in the quarterfinals. The Canadians lost to this duo 14-12 in the round robin and was ready to get their revenge. McKerihen and Chinery came out strong, getting off to a 13-3 lead after nine ends. The Canadian duo would not ease up and continued to put pressure on Norfolk Island for the rest of the game. The Canadians would emerge victorious with a score of 21-6.

In the semi-final, Canada would face Malaysia. Unlike the quarter-final match, Canada started the game off slowly. At the halfway mark, Malaysia was up 10-3. Although the Canadians would count eight ends, they could only muster singles while the Malaysians would count in multiples. The final score was 15-8 for Malaysia. Canada will play for bronze against Scotland at 7:01 pm EDT on April 12th.

Bester to face Burnett in Semi-Final
In the men’s singles, Ryan Bester (Hanover, ON) played South Africa’s Petrus Breitenbach in the quarter-finals. Bester came out guns blazing and jumped to a 15-5 lead after just thirteen ends of play. Breitenbach pushed back to make it 16-8 before Bester closed the deal and finished the game 21-9. Bester will advance to the semi-finals where he will face Scotland’s Darren Burnett in a rematch of the 2014 Commonwealth Games Singles final.

Men’s Fours
The men’s fours team of Cameron Lefresne (Enfield, NS), Greg Wilson (Calgary, AB), Chris Stadnyk (Niagara Falls, ON), and Ryan Stadnyk (Niagara Falls, ON) played their final game of the tournament against Papua New Guinea. Despite no possibility of playoffs for this squad, the men were determined to finish at the .500 mark. Grabbing a 2, a 5, and a 6 in the first three ends saw Canada start with a 13-0 lead. Papua New Guinea would slowly weather the storm and clawed their way back to be within two points, trailing 16-14 after twelve ends. The Canadian squad rebounded just in time to stave off the comeback. Final score was 19-17 for the Canadians.