Bhartu and Westlake Defend Their Titles 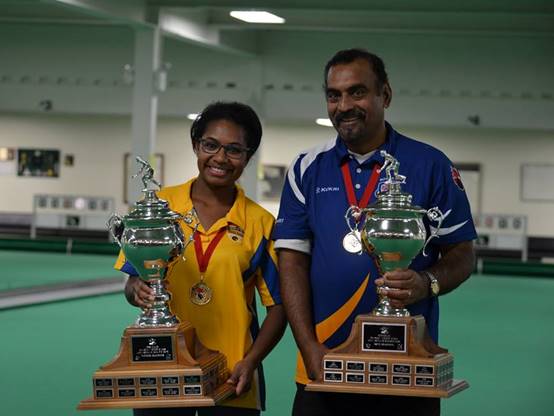 On the men’s side, Bhartu finished the round robin with a 10-1 record with his only loss coming to John Bjornson (Norwood LBC, MB). Bjornson finished second with a record of 8-3. The final between Bhartu and Bjornson would be a rematch of the 2016 Indoor Singles final.

In the gold medal game, Bhartu got off to a quick start, taking the first set 8-2. The second set was a much closer affair coming down to the final end with Bjornson just sneaking it out 9-8. The tie-breaker set saw excellent shots by both players with the game on the line. It could not have been a much closer final, with Bhartu taking the tie-breaker 2-1. For Bjornson, this was his third Indoor Singles Final in the past four years. For Bhartu, he will be representing Canada at the World Cup for his fifth time.

There was a three-way tie for third place on the men’s side between Richard Yau (Richmond LBC, BC), Ed Olson (New Westminster LBC, BC) and Derek Dillon (Calgary LBC, AB). Although Dillon won 11 sets, Yau and Olson won 15 sets, which would put them in the bronze medal match. In the round robin, Olson got the better of Yau in straight sets (7-6, 12-2). In the bronze medal match, Yau would get his revenge with a 3-11, 9-3, 3-1 victory.

On the women’s side, Westlake finished on top with a record of 7-2, with her only losses coming to Emma Boyd (Tsawwassen LBC, BC) and Rainbow Lung (PIBC, BC). There was a four-way tie for second between Boyd, Lung, Claire Day (Edmonton Indoor LBC, AB) and Linda Ng (Richmond LBC, BC) all with records of 6-3. Boyd won the most sets, which put her in second place and into the gold medal match, while Lung and Day would battle it out for bronze.

In the gold medal game, Westlake was quick to get revenge over Boyd. Westlake, the reigning 2017 World Youth Champion, would take the game in straight sets 10-7, 8-4. For Boyd, this was her first appearance at the Indoor Singles Championships. Westlake on the other hand has now claimed the Indoor title for three consecutive years – claiming this feat immediately after Kelly McKerihen (ON) accomplished the Indoor three-peat from 2012-2014.

In the bronze medal game, Day and Lung would battle back-and-forth throughout the entire match. In the round robin, Day got the better of Lung with an 11-2, 7-7 victory. With a medal on the line, the Albertan got off to a quick start, winning the first set 8-5. Lung would not be outdone though, and stormed back to win the second set 11-6. The tie-breaker set was a high scoring affair with Day sneaking out the win 5-4.

By claiming gold, Bhartu and Westlake have earned the right to compete in Warilla, New South Wales, Australia at the 2018 World Cup from March 6 to 14, 2018.