It was an exciting match up for the men’s gold medal game between Lucas Caldwell of Peterborough (Ontario) and Brandon Watson of Regina (Saskatchewan).  Exceptional shot making and back and forth ends had the crowd on the edge of their seats.  Keeping the tension high right down to the last bowls, Caldwell, the only non-Saskatchewan player in the men’s finals, took the single shot that earned him the 2016 Under 25 Champion title for a 21-20 win. 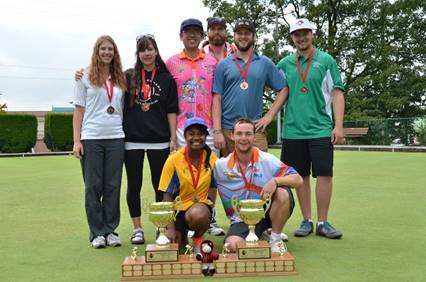 On the women’s side, returning champion and home province favourite Pricilla Westlake of Delta (British Columbia) repeated her 2015 success to win the gold medal 21–14 over Regina’s Sydney Boyd.  Coming out of round robin play Westlake and Boyd were sitting with a 1-1 record against each other.  Picking up the bronze medal in the three-woman field was Stirling Wood of Midland, Ontario.

Westlake, Boyd and Wood have also been named to the Bowls Canada Boulingrin 2016-2017 Youth Development Squad for a one-year term.

Their championship titles earn Caldwell and Westlake the nomination as Canada’s entry to the 2017 World Junior Championships hosted in Queensland, Australia next March.