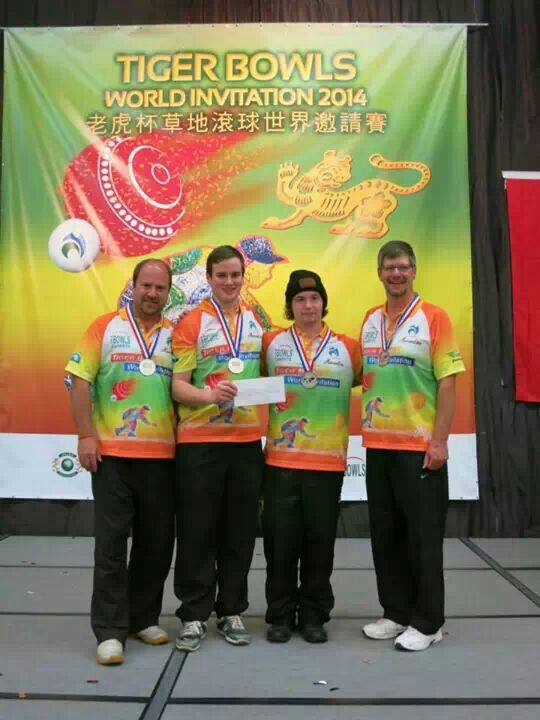 With the 2014 Tiger Bowls/China Open tournaments now underway Canada has captured its first medal.  The Men’s team of Michel Larue, Pat Bird, Jesse Caldwell and Alex LeBlanc captured the Silver Medal after losing a hard fought match to Shanghai.  They defeated Japan to book their ticket into the Gold Medal match.   The men were placed into Group K of the Plate Competition with GBLBC,  LBTC- D, KBGC- A, USRC and Australia- C.

On the Women’s side the team of Mary Ann Beath, Mary Wright, Jaymee Sidel & Pricilla Westlake placed fifth in the Women’s Plate Competition.   They were placed in Group S with ILBC- A, TMSA- A, Kenya, HKCC- A & KBGC-A.

Tiger Bowls/China Open is a dual event tournament.  Tiger Bowls is played under a Men’s and Women’s Fours Skins format, where as China Open is played using the traditional Ends format.   Canadian Head Coach David Mathie will now lead Team Canada to the China Open portion of the tournament which begins on March 18 and concludes March 22, and is being played at Bijishan Park, Shenzhen, China.

Please check back for future results.   To cheer on and support Team Canada, please send them a message through our Facebook page or tweet us @BCBBowls