Quarterfinals and semifinals of the second half of the 2019 Asia Pacific Championships being held on Gold Coast, Australia is complete. Canada will be bringing home three medals from the second half events. 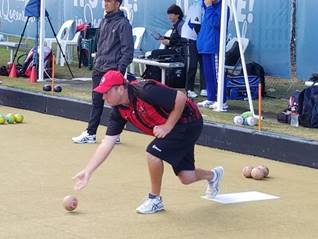 Ryan Bester (Hanover, ON) faced Thailand in the quarterfinal matchup. Bester wasted no time taking care of business, defeating Thailand 21-10. The win put Bester against Australia’s Ray Pearse in the semifinals. Pearse handed Bester his only defeat in sectional play, so Bester was ready to get his revenge. In yet another brilliantly played match, Bester came out ahead, winning 21-14. The Canadian will now face New Zealand’s Shannon McIlroy in the gold medal match. McIlroy and Bester faced off in the 2016 World Championships Singles gold medal match, where the Kiwi claimed top spot. More recently, McIlroy and Bester battled it out for the 2019 Blue Opal Singles title where Bester came out on top. Team Canada’s Head Coach, Terry Scott, also commentated during the broadcast of that 2016 World Championships final, so Bester can expect some key insight from Coach Scott leading into tonight’s matchup. Bester’s match will be live streamed via Bowls Australia’s Facebook page at 11pm EDT 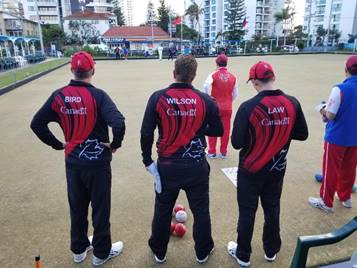 The Canadian crew of Cam Lefresne (Enfield, NS), Greg Wilson (Cochrane, AB), Pat Bird (Calgary, AB), and Rob Law (Winnipeg, MB) had a battle for the ages with Hong Kong in the quarterfinals. Down three going home, Lefresne rolled a bomb to collect three and force the extra end. Lefresne didn’t back down in the extra end either, drawing shot bowl with his first, and covering the T with his second. Hong Kong had no response, and Canada picked up the win 14-13 to move on to face New Zealand in the semifinals. In the semis, the veteran Kiwi team lead by skip Ali Forsyth proved too much for Canada to handle. Despite some well-played bowls, the Blackjacks walked away with the win, 17-6. With no bronze medal matches at these Championships, the Canadian men’s fours team will receive a bronze medal alongside Malaysia, the other semifinalist who did not advance.

Women’s Triples
Leanne Chinery (Victoria, BC), Jordan Kos (Regina, SK), and Jackie Foster (Bridgetown, NS) were in for a tough quarterfinal matchup against New Zealand. The Blackjack squad had

experienced veterans such as Val Smith and Katelyn Inch on the team, yet the Canadian trio overcame the vets to emerge victorious with a score of 21-14. In the semifinals, Canada faced Australia. 2018 Commonwealth Games gold medalists Carla Krizanic, Natasha Scott, and Rebecca Van Asch were favourites going into the event, yet the Canadian women gave them a game they won’t soon forget. The Canadians took control early forcing the Australians to dig deep into their wells in the 16th end where they scored a massive five points that would prove to be the turning point of the game and ultimately allow them to pull ahead over the final two ends for a 20-15 win. Although they don’t advance to the gold medal game, Chinery, Kos and Foster will come home with a well-earned bronze medal for Canada.