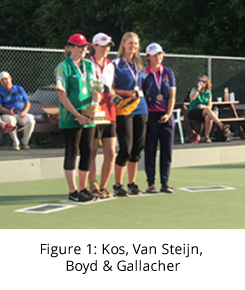 Day three started with the semi-final matches for the girls. Alexis Gallacher (AB) proved no match for Jordan Kos in the first semi-final match, as Kos won 18-3. In the other semi-final, Baylee Van Steijn (ON) edged out Emma Boyd (BC) 18-13.

In the final, Kos got out to a quick start and kept the pressure on throughout the whole match. Van Steijn fought hard, but Kos proved too much. The final score was 18-8.

In the bronze medal match, Boyd found her draw game and put the pressure on early. Despite a great effort from Gallacher, Boyd proved superior with an 18-9 victory.

On the boys’ side, a tie-breaker match was needed to determine the semi-finalists. Carter Watson (SK) overcame Erik Galipeau (ON) 18-7 to advance to the semi-finals. 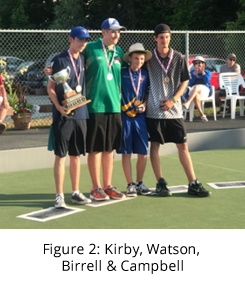 In the semis, Kirby faced two-time defending champion, Braeden Campbell (NS). Campbell was looking to be the first male to ever win the championship in three consecutive years, but Kirby played a brilliant match to win 18-15. In the other semi-final match, Watson was faced with undefeated Trevor Birrell (BC). Despite very consistent play from Birrell, Watson proved victorious with a final score of 18-16.

In the finals, Kirby got off to a hot start. Making both consistent draws and incredible conversion shots, the match appeared to be a one-sided affair. Watson didn’t yield though, and managed to change the pace of the game. Watson clawed his way back and the two traded blows for the remainder of the match. The final score was 18-14 for Kirby.

In the bronze medal match, Birrell drew the jack consistently throughout the entire game. Campbell was forced to play drive-shots on most ends, and connected on the majority of them. However, Birrell’s steady play proved too much in the end, as the BC native took the bronze medal with a final score of 18-15.

For more information on the 2017 Canadian Junior and Under 25 Championships, please visit:
http://www.bowlscanada.com/en/championship/2017champ_u25.html