Carah Webster (BC) and Cam Lefresne (NS) are the 2017 Canadian Under 25 Champions. 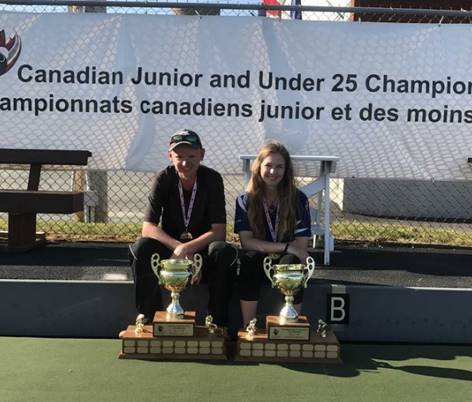 Over the course of three days, 13 men and three women competed in Dartmouth, Nova Scotia for the chance to represent Canada at the 2018 World Youth Championships in Gold Coast, Australia next February.

The women competed in a triple round robin, which saw Pricilla Westlake (BC), finish top of the pool and Carah Webster finishing second. The gold medal match between Westlake and Webster was anything but dull, as the women’s match could have gone either way. Despite getting up to a 15-7 lead, Webster had her work cut out for her as Westlake fought back to make it 19-18. In the end, Webster emerged victorious with a 21-19 victory over Westlake to claim the gold.

On the men’s side, the 13 competitors were split into pools of six and seven. Brandon Watson (SK) finished first in Pool A, while Lucas Caldwell (ON) defeated Braeden Campbell (NS) in a tie-breaker to claim second spot in the pool. In the B Pool, Rob Law (MB) finished first, while Cam Lefresne finished second. The semi-final matchups saw Lefresne take down the undefeated Watson with a score of 21-12. The other semi-final match went to Caldwell, as he defeated Law 21-10.

In the final, Lefresne got up 19-6 before Caldwell started to shine. In a thrilling match, Caldwell clawed back to make it 19-18 before Lefresne finally came away with the gold.

Lefresne and Webster will represent Canada at the World Youth Championships in Gold Coast, Australia in February 2018.

For more information on the 2017 Canadian Junior and Under 25 Championships, please visit:
http://www.bowlscanada.com/en/championship/2017champ_u25.html