Canadian Lawn Bowlers off to strong start at 2018 Commonwealth Games 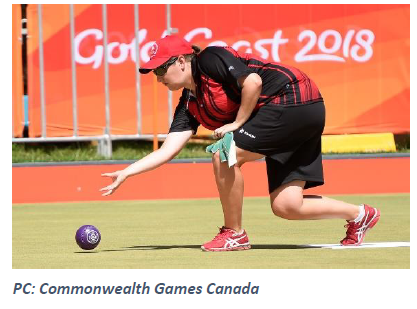 Canadian Lawn Bowlers are off to a strong start at the 2018 Commonwealth Games. Kelly McKerihen (Toronto, ON) got the party started with a decisive 21-9 victory over Botswana’s Nelly Senna. When asked how she felt about her first match, McKerihen said “It was a great way to start the tournament. Obviously, there’s a lot of work to be done, but one game at a time. To start off with a win is definitely the first check mark”. McKerihen faced Catherine Wimp of Papua New Guinea for her second round of the day. After a slow start that saw her trailing 1-6 after six ends, McKerihen picked up a big 3 in the 7th to turn the momentum her way. There was no looking back after that and she finished her day with a second win 21-14. McKerihen currently sits second in her pool behind Norfolk Island’s Carmen Anderson. McKerihen faces Nooroa Mataio of the Cook Islands in her next match.

In Men’s Triples action, Cameron Lefresne (Enfield, NS), Greg Wilson (Calgary, AB) and Chris Stadnyk (Niagara Falls, ON) had a bye in the first round. They faced Namibia in round two where they faced stiff competition. The half-way mark saw the Canadians down 2-13 at which point all players were called off the greens due to heavy down pours. This break allowed the Canadians to re-group coming back on the green after the delay to battle back to an 11-16 loss. “Definitely not the start we wanted,” said vice Greg Wilson. “Being my first Commonwealth Games, I was really excited to get out there. I think I let the big show get inside my head and I wasn’t the confident player out there. But after the rains, I got a chance to reset myself and I went back out there and I was the player that I know myself to be. Knowing that I can play like that, on this stage, should build confidence heading into the next game for sure.” Singapore is up next for the Canadian trio.

The Women’s Fours of Leanne Chinery (Victoria, BC), Pricilla Westlake (Delta, BC), Joanna Cooper (Calgary, AB) and Jackie Foster (Bridgetown, NS) started strong with a 25-11 victory over a strong Wales team. The team came up against the very tough Scotland team in round two. Although the Canadians played extremely well, Scotland came away with a 21-7 victory. Sitting third in their pool, the Canadian foursome face a must win situation against Niue in their next game. 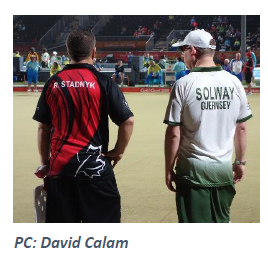 The Men’s Pairs duo of Ryan Bester (Hanover, ON) and Ryan Stadnyk (Niagara Falls, ON) are currently topping the standings in their pool with two wins on the first day of competition. With the strong Australian pair of Brett Wilkie and Aaron Wilson still to come, the Canadians will look for another win when they face Malta in round four of the competition. The Canadians will have a bye in round three.

About the Commonwealth Games
The Commonwealth Games are a multi-sport event that takes place every four years amongst the
Commonwealth countries. The 2018 event will take place along the Gold Coast of Australia, with the bowls portion of the event being hosted at the Broadbeach Bowls Club from April 4 – April 13, 2018.