Canadian Success at 2019 US Open

It was an exciting week of bowling in Sun City as 106 Canadians took to the greens alongside representatives from 14 different countries in the 2019 US Open. 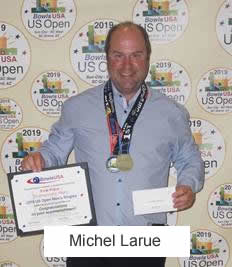 Competing in Men’s and Women’s Singles, Pairs and Fours play, there was lots of success in the competition for our Canadians:

Men’s Singles
In the Men’s Singles, it was Quebec’s Michel Larue who dominated the 144-player field to take home this year’s Men’s Singles title. Larue went seven wins in a row in the championship flight, topping American Brent Boone in the final to take home the gold medal. In the bronze medal game, it was Ontario’s Mike Wagner who ended off with a respectable fourth-place finish after a loss to Terry Mar of the United States. 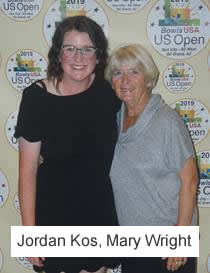 Women’s Singles
In the Women’s Singles, it was two of Canada’s best who rose out of the 80-player field as the final came down to a rematch of the 2016 and 2017 Canadian Singles finals as Mary Wright of British Columbia and Jordan Kos of Saskatchewan squared off in the final at the Bell Lawn Bowling Club. After a tight start in the match, it was Wright who jumped ahead to a healthy 17-8 scoreline on the race to 21. But the young Saskatchewan star and member of the Canadian Senior Squad would not be deterred and pushed the envelope with fantastic shot-making in front of a packed crowd, going on a 10-3 run before Wright scored the winning point to win the gold medal 21-18. In the bronze medal game, it was Ontario’s Laura Seed, who ended up with a respectable fourth-place finish in the championship flight after a loss to Lorraine Hitchcock of the United States. 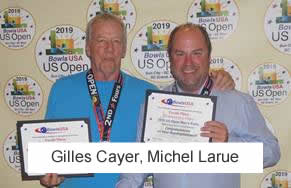 Men’s Pairs
In the Men’s Pairs, it was Quebec’s Michel Larue and Gilles Cayer who finished with an honourable fourth-place fish in the strong 104 team field after a semifinal loss to eventual silver medalists Grant Shear and Barry Hayes of the United States and a bronze medal decider loss to David Hamilton and Norman Thompson of the United States. 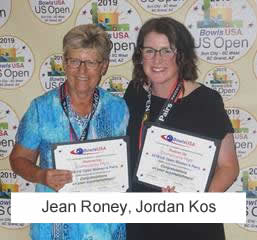 Women’s Pairs
In the Women’s Pairs, Saskatchewan’s Jean Roney and Jordan Kos came to the event on a mission to return to the final after a silver medal performance in the 2018 competition. The Regina duo did just that, going an impressive 5-0 record, including a strong semifinals victory over 2019 Canadian Women’s Pairs Champions Peggy Plathan and Patricia Walker. In the finals after a slow start to the match, Roney and Kos pushed back against the American duo of Anne Nunes and Janice Bell, storming up the scoreboard to sit game in the final end before the former US Champion was able to make the drive that she needed to remove two Canadian bowls and take the gold medal win 16-14. 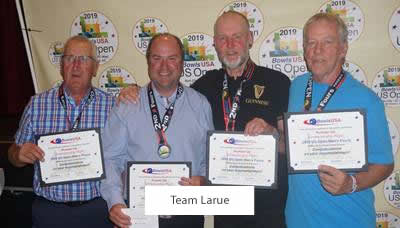 Men’s Fours
In the Men’s Fours, it was an exciting finish for the Quebec, United States and Jersey combo of Michel Larue, Gilles Cayer, Andy Docter and Robert Clive as they went 5-0 on their way to the finals, including a semifinals win over Des Cann Jr of Australia’s rink (featuring Saskatchewan legend Keith Roney at lead) before dropping a finals decider to Ivan Hyland, Lou Cohen, Tad Dutch and Mike Ruggles of the United States. Roney’s rink would then drop into the Bronze Medal Game, where they ended off with a respectable fourth-place finish after a loss to Gareth Cole, Robin Hoey, Daniel Gorelick and Eric Carter. 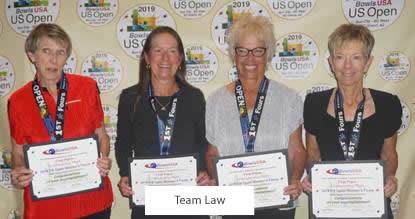 In the Women’s Fours, it was a showcase of extraordinary Canadian bowls talent as Donna Law’s rink of Law,Bev Robinson of Alberta, Ann Sherman of the United States and Sharon Perry of the United States faced off against the Saskatchewan and Ontario combo of Jean Roney, Jordan Kos, Rosalie Parsons-Brown and Sue Roth. After battling it out through the 24-team field, the teams were at the top of their game, with impressive shot making throughout the gold medal game.Coming down to the final shot, it ended off with Team Law taking home the gold medal with a nail biter 14-13 victory. In the bronze medal game, it was a strong victory for the British Columbia based combo of Mary Wright, Lynn Coules, Linda Ng and Colleen Gillies as they topped Nancy Santos, Kim Davis, Barbara Lee and Jolynnn Geglia to take home the bronze medal. 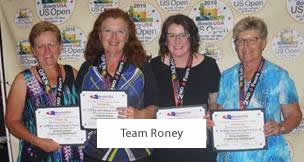 Bowler of the Tournament
With some fantastic play from all the Canadians in Singles, Pairs and Fours play, it was expected going into the Saturday evening banquet that there would likely be many Canadians in contention for the Men’s and Women’s Bowler of the Tournament honours. In the Men’s competition, it was Michel Larue of Quebec who took home the honours with a Men’s Singles Gold Medal, Men’s Pairs 4th Place medal and Men’s Fours silver medal. In the Women’s events, the exciting week of competition decided not one but two champions as they finished off in a tie for the award. Jordan Kos of Saskatchewan showed everyone that youthful talent can lead to amazing things as the 19-year-old made it to three finals in only her second US Open, taking home Singles, Pairs and Fours Silver medals. Tied for the title, former Canadian Champion Mary Wright of British Columbia joined Kos as the best of the tournament, showing off her legendary experience on the greens with Gold in Singles and a bronze in the Fours.

Bowler of the Tournament

For standings and results, visit: https://www.lawnbowlingusopen.com