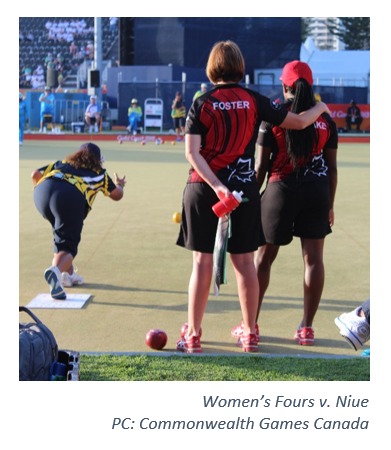 The Women’s Fours of Leanne Chinery (Victoria, BC), Pricilla Westlake (Delta, BC), Joanna Cooper (Calgary, AB) and Jackie Foster (Bridgetown, NS) have secured their spot in the quarter-final round of Women’s Fours competition.  The foursome played their last game of the round robin against Niue. Sitting in third place in their pool, this was a must-win game for Canada. With Scotland (2-0) and Wales (1-1) facing off in the other round robin match, Canada needed to win by a large margin to guarantee they would win the point differential tie breaker to advance to the quarter-finals and they certainly delivered with a 20-9 victory.   The quarter-finals will be played on April 7th at 2:01 am EDT.

Earlier in the day, Kelly McKerihen (Toronto, ON) also secured her spot in the quarter-finals of Women’s Singles.  Maintaining her dominant play with a 21-7 victory over Cook Island’s Nooroa Mataio. McKerihen kept her undefeated streak going, by defeating Kenya’s Eunice Mbugua 21-10. With the victory over Kenya, McKerihen improved her record to 4-0, guaranteeing herself a spot in the quarterfinals. McKerihen still has one more game to play against Norfolk Island’s Carmen Anderson. Although this game won’t affect the advancement to the quarter-finals, it will determine which athlete will finish first in the pool.  “I think I have to go in as a preparation game because I’m going to be having two games tomorrow. I want to have the chance to build some confidence, play consistently to bring the momentum into tomorrow afternoon’s game”, said McKerihen.  The Women’s Singles quarter-finals will be played on April 7th at 7:01 pm EDT.
In Men’s Triples action, Cameron Lefresne (Enfield, NS), Greg Wilson (Calgary, AB) and Chris Stadnyk (Niagara Falls, ON) picked up their first win of the Games by defeating Singapore 13-12. Canada continued their excellent play in the next round against title contender New Zealand. Despite dropping a few big ends, the game came down to the wire with New Zealand up 14-13 going into the final end. Canada couldn’t quite pull through and lost 16-13. The Canadian trio face Niue April 6th at 7:01 pm EDT. 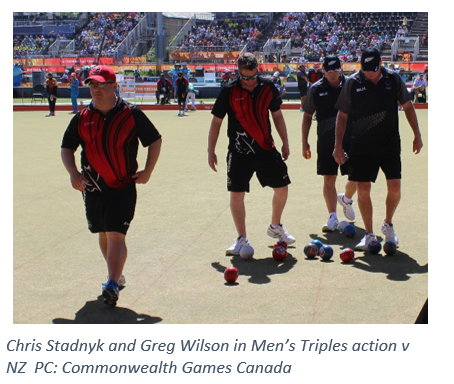 The Men’s Pairs duo of Ryan Bester (Hanover, ON) and Ryan Stadnyk (Niagara Falls, ON) faced a difficult Malta duo to wrap up play on Day 2.  Malta got on the board early with a big four in the opening end and never looked back.  The Canadians battled through to the very end, but ultimately were unable to overcome Malta’s momentum.  Final score 26-12 for Malta.  The “#TwoRyans” face a must win situation when they meet Australia in the final game of their section at 10:30 pm EDT April 6th.