Canadian lawn bowls athletes continued their chase for medals at the 2018 Commonwealth Games in Gold Coast, Australia as the Canadian Men’s Triples, Women’s Fours and Women’s Singles all advance to the semi-finals stages of competition. 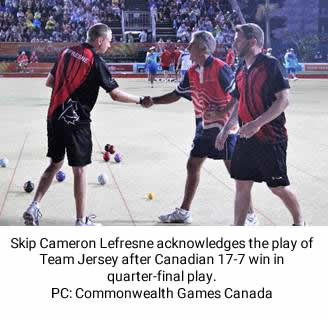 Stadnyk (Niagara Falls, ON) were sitting in 4th in their group with a record of 1-2 going into the final game of the round robin. In order to advance to the quarter-finals, they not only needed to beat Niue by a substantial point deferential, they also needed New Zealand to beat Namibia by a large margin. New Zealand came through by thrashing Namibia 28-8, and left the door wide open for Canada’s trio to make their move. The Canadian’s match against Niue started off tight, with Canada trailing 4-3 after 6 ends of play. The Canadian men then buckled down as they scored four consecutive ends of 3, 4, 3, and 2 to make it 15-4 in their favour. The men would continue to put pressure on Niue for the rest of the game and finishing with a score of 23-7. The win, coupled with Namibia’s loss, pushed Canada into 2nd place and earned a berth to the quarter-finals where the Canadians capitalized on their momentum and picked up a 17-7 win against Jersey  to secure a trip to the semi-finals. “Cameron and Greg played tremendous bowls here today”, said lead Chris Stadnyk of Greg Wilson and Cameron Lefresne who play the second and skip positions respectively.  When asked about their chances in the next round, Wilson said “I like our chances. If we play together the way I know we can, we definitely have a shot to compete with anybody here”. 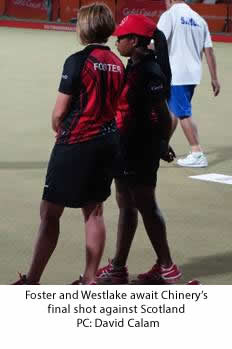 The Women’s Fours team of Leanne Chinery (Victoria, BC), Pricilla Westlake (Delta, BC), Joanna Cooper (Calgary, AB) and Jackie Foster (Bridgetown, NS) faced a strong rink from Scotland in their quarter final later in the day.  Although Scotland was favoured to be in the final rounds of the competition, Canada took control of the game early on with a big score of four in the fourth end.  The Canadian foursome did not look back as their lead continued to build, ultimately forcing Scotland to concede in the 15th end where the Canadians scored a massive five to push the score to 24-11 and effectively run the Scots out of bowls.

Finishing second on in her section with a record of 4-1, Toronto’s Kelly McKerihen earned a spot in the quarter-finals against Scottish sensation Caroline Brown.  Against the 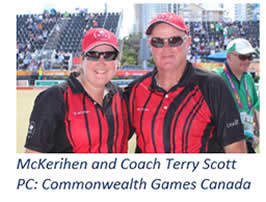 backdrop of an enthused and boisterous crowd, the two athletes traded incredible shots back and forth.  Having relocated to Australia in 2015 to concentrate on her bowls development, McKerihen was able to display nerves of steel and took control of the game in the 18th end to score three consecutive twos for a final score of 21-12.   “I am absolutely over the moon,” said McKerihen immediately following her victory. “To come away with a win against an opponent like Caroline (Brown), on a big stage like this is like a dream coming true”.

The Men’s Pairs duo of Ryan Bester (Hanover, ON) and Ryan Stadnyk (Niagara Falls, ON) went into their last match of round robin play in 3rd place in their group with a record of 2-1. Their final match was against local favourites Brett Wilkie and Aaron Wilson of Australia, the same duo that won the 2016 World Championships Men’s Pairs gold medal. The two Ryan’s faced with an uphill battle, needing to win by a margin of 34 shots in order to advance to the quarter-finals. Despite a hard fought game, Australia proved too much for the duo, and Canada’s hopes of playoff contention in Men’s Pairs was snuffed by a final score of 15-12. Bester will now focus on his preparations for Men’s Singles which begins April 9th local time and Stadnyk with join the other three men for the Fours competition which begins April 10th local time.

Follow the action on the Bowls Canada Twitter feed @BCBBowls.  Fans can also find results on the official Gold Coast website at https://results.gc2018.com/en/lawn-bowls/daily-schedule.htm For more details on the athletes, please visit: http://www.bowlscanada.com/en/hp/commonwealth.html