The first half of the 2017 Multi-Nations Event in Gold Coast, Australia, has been completed, with Canada advancing to the bronze medal match in women’s fours.

This event being a test-matchup for the 2018 Commonwealth Games, many countries brought more than the five players necessary to field a team, including Canada. This gives team managers like Canada’s Don Caswell the chance to rotate players and see different lineups competing together at an international event.

Round six had Canada take on Malaysia. Local resident Ryan Bester teamed up with Greg Wilson and Michael Pituley in the men’s triples, but lost the match 24-15. Club mates of the Niagara Falls Lawn Bowling Club, Chris Stadnyk and Kody Olthof joined forces in the pairs, but came away with a 21-7 loss as well. The women’s fours team of Kelly McKerihen, Leanne Chinery, Jordan Kos, and Pricilla Westlake were unwilling to lose two games in a row, and finished with a tie of 14-14. The women’s singles game saw Jackie Foster battle unsuccessfully to a loss of 21-11. 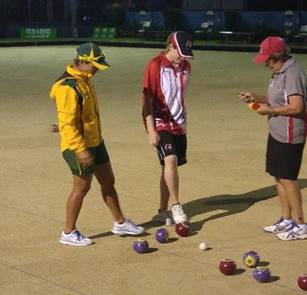 The seventh and final round of the first half of the event brought on the other Australian team, Australia Gold. In the men’s triples, Chris Stadnyk, Kody Olthof, and Michael Pituley couldn’t contend and lost 27-7. Ryan Stadnyk and Cameron Lefresne lost a close battle against the defending World Pairs Champions of Aaron Wilson and Brett Wilkie, 18-13. The women’s fours squad, this time made up of Kelly McKerihen, Shirley Fitzpatrick-Wong, Jackie Foster, and Pricilla Westlake, were handed their second loss of the event, 25-10. Jordan Kos, playing her second international game outside of Canada, took reigning World Singles Champion Karen Murphy all the way to the edge, losing 21-20.

The second half kicks off on June 5th, at 8:45AM local time with the men competing in fours and singles, while the women compete in triples and pairs. All medal matches will take place on June 7th.