Second Half Underway at 2017 Multi-Nations Event

Day one of the second half of the 2017 Multi-Nations Event in Gold Coast, Australia, has been completed.

The event is a test-matchup for the 2018 Commonwealth Games and many countries, including Canada, brought more than the five players necessary to field a team. This provides an opportunity to rotate players and see different lineups competing together at an international event. 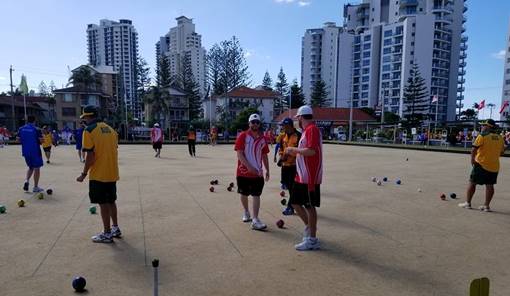 Round one of the second half started the round-robin over again, with Wales being the first combatant to face Canada. The Canadian women’s team in the first round was the same lineup that competed in the 2016 World Bowls Championships. Kelly McKerihen, Leanne Chinery, and Pricilla Westlake lost 20-8 in the triples, while Shirley Fitzpatrick-Wong and Jackie Foster defeated the reigning 2016 World Bowls Women’s Pairs champions 19-17. On the men’s side, Ryan Bester, Cameron Lefresne, Greg Wilson and Ryan Stadnyk won their first match with a score of 16-7, while Kody Olthof lost in the singles 21-5.

Round two had Canada take on New Zealand. McKerihen, Chinery, and Joanna Cooper tied in the triples 20-20, while Westlake and Jordan Kos lost to the 2016 World Bowls Women’s Pairs silver medalists, 22-9. On the men’s side, Bester, Lefresne, and Chris and Ryan Stadnyk lost to the defending 2016 World Bowls Men’s Fours champions 14-8. Michael Pituley played in the singles and lost 21-9.

In the third round Canada faced Scotland. The women’s triples team of McKerihen, Chinery, and Westlake lost 23-14, while the pairs team of Fitzpatrick-Wong and Foster lost 24-13. The men’s fours team of Bester, Lefresne, Wilson and Ryan Stadnyk bounced back with a nail-biter win 16-15. Olthof lost a tight singles match to Darren Burnett, the 2014 Commonwealth Games gold medalist and 2016 World Bowls Championships bronze medalist, 21-16.

The fourth and final round of the day was against Hong Kong/China. Fitzpatrick-Wong, Cooper, and Kos picked up a win for the triples team with a score of 22-16. The women’s pairs saw southern hemisphere residents McKerihen and Chinery team up to get a victory with a final score of 22-14. Bester, Lefresne, Pituley, and Chris Stadnyk kept the momentum going in the fours with a 14-12 victory. Wilson played in the singles and was defeated 21-9.

Day two of the second half of the competition begins on June 6th, at 8:45AM local time with the men competing in fours and singles, while the women compete in triples and pairs. All medal matches will take place on June 7th.