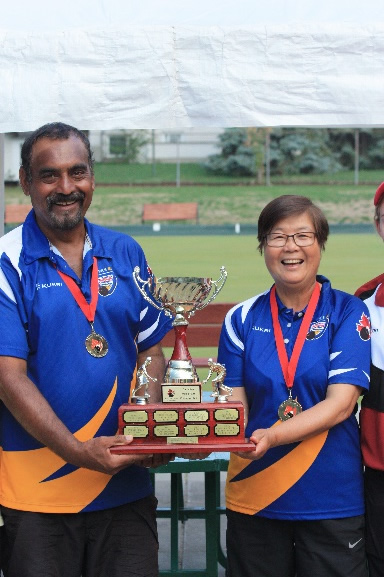 The 2016 Canadian Mixed Pairs Championship came to an exciting close on Tuesday at the Glenridge Lawn Bowling Club in St. Catharines, Ontario.  Over the course of the week, ten teams from across the country put their best bowl forward in hopes of being crowned champion.  The Mixed Pairs Championship is one of Bowls Canada’s most popular championships because it enables men and women to compete together for a National title.

Competition throughout the round robin was very strong.  While Bob and Betty Van Walleghem of Manitoba earned their spot in the gold medal game with a first place standing in round robin play, two tie breakers were required to determine the remaining spots in the medal rounds.

In the first tie breaker game, British Columbia’s Josephine Lee and Hirendra Bhartu defeated Ontario-West’s Trisha Bucknall and Joe Kinney (27-6) for the right to face the Van Welleghems in the gold medal game.  Despite their loss, Bucknall and Kinney secured a spot in the bronze medal game.

In the second tie breaker game, Ontario-East’s Donna McCallum and Patrick May faced Nova Scotia’s Lorraine and Steve Bezanson to determine the final spot in the bronze medal game.  This very exciting match came down to the wire as McCallum and May edged out the Bezansons with a final score of 18-17.

In the gold medal game, British Columbia was looking for revenge for their earlier round robin loss against their gold medal opponents.  Lee and Bhartu stayed focused throughout the gold medal game to win with a score of 17-9.  The victory represented the duo’s fifth Mixed Pairs Championship title.