After a tough three days of competition, the biennial North American Challenge has come to a close. 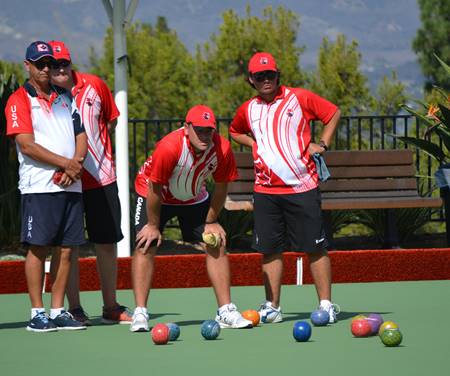 The third and final day saw heavy rains soak the artificial carpet of the Laguna Woods Lawn Bowling Club. Players on both teams struggled through the rain to try and claim the seven coveted trophies.

On the Men’s side, it was a sluggish start for the singles players. Both John Bjornson (MB) of Team Folkins and Owen Kirby (ON) of Team Jarvis started out 0-2. In the final game, Bjornson lost a tough one, while Kirby won a thrilling 28-end match.

In the Men’s Fours, the Jarvis team of Cam LeFresne (NS), David-James Smith (QC), Carter Watson (SK), and Erik Galipeau (ON) worked out some kinks in the first match before putting up a great fight in game number two. Despite their best efforts, they came up two points shy to go 0-2. In their last game, they had all cyclinders firing and finished with a win. The Folkins squad of Greg Wilson (AB), Braeden Campbell (NS), Rob Law (MB), and Brandon Watson (SK) absolutely crushed the Americans in the first two games, winning 22-4 and 29-5. In the final game, they were in for a tighter match as the Americans handed the Folkins foursome their first defeat in a 14-12 match. 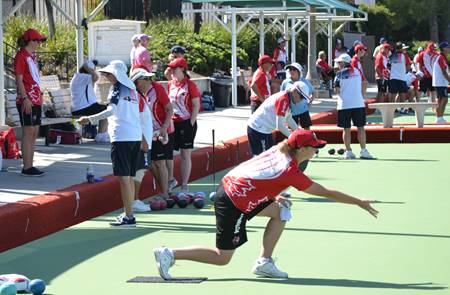 In the Women’s Singles, Lynda Robbins (BC) and Jordan Kos (SK) battled hard on the greens. Robbins couldn’t quite seal the deal, going 0-3, while Kos picked up one win to finish 1-2.

In the Women’s Fours, the Folkins squad of Pricilla Westlake (BC), Betty Van Walleghem (MB), Baylee Van Steijn (ON), and Alexis Gallacher (AB) narrowly lost their first match before rebounding with a win. In the final game, the Canadians came up one point shy in 17-16 match.

The Jarvis squad, comprised of Shirley Fitzpatrick-Wong (MB), Joanna Cooper (AB), Fran Scott (SK), and Emma Boyd (BC), clicked right away, picking up two wins in their first two games. In the final game, the Americans had an answer and defeated the Canadians 14-9.

Despite Canada’s best efforts, the Americans walked away with all seven of the coveted NAC trophies. Here are the final standings for all seven trophies:

For the full results and more information on the North American Challenge please visit: http://www.bowlscanada.com/en/hp/nac.html.