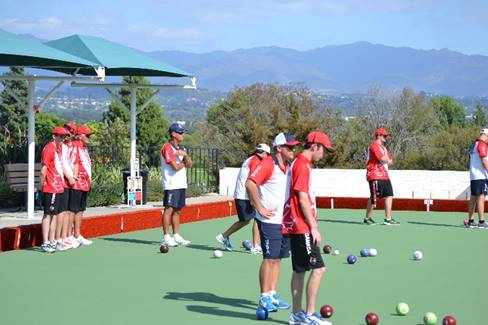 With the pairs and triples competition complete, Team Canada trails Team USA going into the second half of the North American Challenge.

The greens were running roughly 15 seconds at the Laguna Woods Bowls Club yesterday, which is equivilent to the outdoor greens of the Southern Hemisphere.

On the Women’s side, both triples teams fought hard. The Folkins squad of Pricilla Westlake (BC), Betty Van Walleghem (MB), and Alexis Gallacher (AB) had some well close games but couldn’t quite hold on long enough for a win. The Jarvis squad of Shirley Fitzpatrick-Wong (MB), Fran Scott (SK), and Emma Boyd (BC) had better luck as they defeated both American Folkins and Jarvis teams by double digits to advance to the high vs high round. In the high vs high game, the Canadian Jarvis trio snuck out a win 17-16 to go 3-0 in the triples.

In the Women’s Pairs, Lynda Robbins (BC) and Baylee Van Steijn (ON) would pick up the slack for the Folkins squad. Two close victories pushed Robbins and Van Steijn into the high vs high match. In that final game, the Canadian Folksin duo couldn’t quite handle their American counterparts. Joanna Cooper (AB) and Jordan Kos (SK) on the Jarvis team couldn’t quite find their groove, losing their first two before picking up a win in their last game. 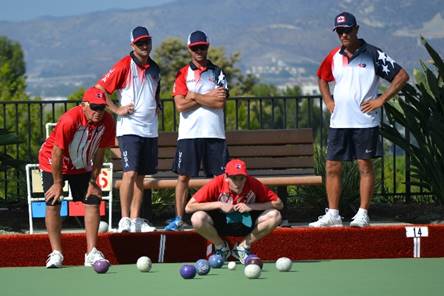 On the men’s side, it was a slow start to the tournament for both triples teams. The Folkins team of Braeden Campbell (NS), Rob Law (MB), and John Bjornson (MB) struggled on the fast carpet, losing their first two games before picking up a win in the third. The Jarvis team of David-James Smith (QC), Carter Watson (SK) and Erik Galipeau (ON) lost the first game, but picked up a convincing win in the second game before running away with the high vs high game.

In the Men’s Pairs, Greg Wilson (AB) and Brandon Watson (SK) struggled for team Folkins. After losing the first two games, Wilson and Watson woke up and wrapped up the pairs event with a W. Cameron LeFresne (NS) and Owen Kirby (ON) of team Jarvis snuck out a 17-16 win in their first match before losing their next two games.

At the mid-way point, here are the standings for all seven trophies:

Going into the second half of the competition, it now switches over to singles and fours.

For the full results and more information on the North American Challenge please visit: http://www.bowlscanada.com/en/hp/nac.html.