Strong Canadian presence for the greens of the 2018 Commonwealth Games

Bowls Canada Boulingrin is pleased to nominate 10 athletes to represent Canada on the Australian greens for the 2018 Commonwealth Games. Five female and Five male athletes will aim their sights on the podium come April. This dynamic group of individuals will compete in multiple disciplines of singles, pairs, triples and fours.  Each athlete is nominated based on their individual strength, as well as their ability to compete in a team element. 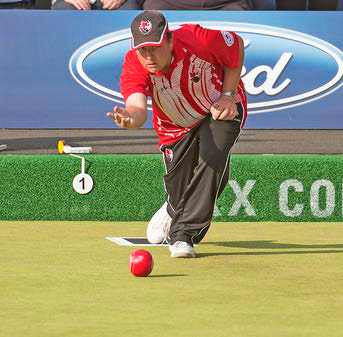 The nominated bowls team consists of Commonwealth veterans Ryan Bester, Leanne Chinery, Jacqueline Foster, Kelly McKerihen and Chris Stadnyk. This will be Chinery’s third, Stadnyk’s fourth and Bester’s fifth Commonwealth games. With a bronze and silver individual Commonwealth medal already under Bester’s belt, he is looking to add to his collection at these Gold Coast Games. Greg Wilson, Ryan Stadnyk, Cameron Lefresne, Joanna Cooper and 2017 World Youth Champion Pricilla Westlake will be adding to the strength of this team. All ten of these athletes had the opportunity to compete together at the Multi-Nations championship last June where Westlake, McKerihen, Cooper and Chinery brought home a bronze medal in the women’s fours event.

Head coach Terry Scott and team manager Jean Roney will be leading the team on and off the greens in April.

“The Canadian Bowls team has proved in the past to be a competitive unit at the international level” says Head coach Terry Scott. “The mission for this side is to uphold that tradition and show once again that they can be successful on the international stage. It is a pleasure to be associated with a team of both rookies and veterans that is so committed to achieving podium results.”

The complete list of Canadians nominated for the bowls events at the 2018 Commonwealth Games Team includes:

Detailed athlete biographies can be found at: http://www.bowlscanada.com/en/hp/senior.html

“Canada is ranked 3rd in lawn bowls over the history of the sport at the Commonwealth Games,” said Claire Carver-Dias, Canada’s Chef de Mission, “and we know that they will be competitive at the Gold Coast Games. Ryan Bester’s silver medal at the Glasgow 2014 Games was a great performance, and we can be sure that he will be aiming for the top of the podium next April.”