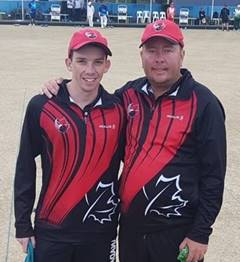 Canada’s Rob Law (Winnipeg, MB) and Ryan Bester (Hanover, ON) secured Canada’s first medal at the 2019 Asia Pacific Championships.   A 21-16 defeat over Thailand secured the duo a semi-final berth against Australia’s Ray Pearse and Nathan Rice.   The Canadians battled hard in the semi-final match but could not find their groove against the strong Australian side and were defeated 6-21.

Bester and Law will share equal bronze medals with Malyasia who were defeated by New Zealand’s Shannon McIlroy and Gary Lawson.  The gold medal match between Australia and New Zealand will be played on June 22.

Kelly McKerihen (Toronto, ON) met two-time Commonwealth Games Champion Jo Edwards of New Zealand’s in the Women’s Singles Quarterfinals. McKerihen and Edwards dueled it out right to the end, however it was Edwards who came out victorious on the day 16-21. Edwards would go on to defeat India in the semis and has earned the right to compete for the gold against Norfolk Island.

The Canadian women’s fours team of Foster (Bridgetown, NS), Cooper (Calgary, AB), Kos (Regina, SK), and Chinery (Victoria, BC) met a strong squad from Hong Kong in the Quarterfinals for Women’s Fours. Hong Kong came out blazing and stole the show with a 17-7 victory. Hong Kong moved onto the Semi Finals but fell to a strong New Zealand side who will go on to meet Malaysia in the gold medal match.
“We are extremely pleased with the solid performances from all of our players,” said High Performance Chair Don Caswell.  “Our women continue to demonstrate that they belong with the bowling elite.  The bronze medal for Bester and Law further solidifies that Canada is a contender on the world stage.”

Live streaming will be available on June 22 can be found on Bowls Australia’s Facebook page: www.facebook.com/BowlsAustralia