Sectional play for the first half of the 2019 Asia Pacific Championships has finished. Team Canada will play in the quarterfinals in three of the four disciplines.

Rob Law (Winnipeg, MB) and Ryan Bester (Hanover, ON) did what they needed to do on day 3. In round 7, they defeated Fiji by a score of 19-11; in round 8, they defeated Norfolk Island 23-9; in round 9, the Canadian duo finished the sectional play with a win over Samoa 24-7. With a record of 6-2, the Canadian pair finished 3rd in their section and will advance to play Thailand in the quarterfinals. This should be a tough match for Canada, as Thailand went 5-2-1 in their section; their only losses coming to USA and Malaysia, and their tie was against Australia. Despite Thailand finishing 3rd in their pool as well, expect this to be a back-and-forth battle.

Pat Bird (Calgary, AB), Greg Wilson (Cochrane, AB), and Cam Lefresne (Enfield, NS) had a rough third day. The trio started off against a difficult New Zealand team, losing 11-19. The men had a bye in round 8, before finishing the sectional play with a loss to Fiji 11-21. With the two losses, Canada dropped to 6th place in the pool with a record of 4-4 and will not advance to playoffs. The teams that finished in 2nd and 3rd place in both men’s triples pools had records of 5-3, so the Canadians can hold their heads high, knowing they were just one win away from potentially making it to the quarterfinals.

The Canadian crew of Leanne Chinery (Victoria, BC), Jordan Kos (Regina, SK) Joanna Cooper (Calgary, AB), and Jackie Foster (Bridgetown, NS) started day 3 with a tough loss to New Zealand, 15-12. The women rebounded in round 8, with a 15-12 victory over USA before finishing the sectional play with a 13-11 loss to Philippines. With a record of 6-2, the women finished 2nd in their pool and will play Hong Kong in the quarterfinals. Hong Kong finished with a record of 5-2, with their losses coming against Japan and Australia. The Canadians played better throughout the week, with a shot differential of +76, compared to Hong Kong’s +4, so expect the Canadians to come out swinging. 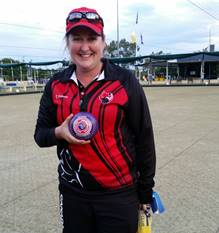 Kelly McKerihen (Toronto, ON) had a nail-biter game in round 7 against Thailand. McKerihen snuck away with the victory, 21-19. In round 8, McKerihen faced Malaysia’s Siti Zalina Ahmad, who was undefeated with a record of 7-0 and sitting in first place in the group. Despite her best efforts, McKerihen couldn’t quite overcome Ahmad, and finished with a score of 16-21. The Canadian rebounded in game 9, and defeated Philippines 21-15. With a record of 7-2, McKerihen finished 2nd in her pool and will face New Zealand’s Jo Edwards in the quarterfinals. Edwards went 7-1 in her section, with her only loss coming to India in round 3. McKerihen and Edwards have played each other several times over the years, so expect this match to go down to the wire.

Live streaming will be available on June 22 can be found on Bowls Australia’s Facebook page: www.facebook.com/BowlsAustralia