Canadian Lawn Bowlers were in the hunt for three gold medal rounds heading into day 4 of Competition at the 2018 Commonwealth Games in Gold Coast, Australia. With the both the Men’s Triples and Women’s Singles both settling for fourth place despite some stellar bowls, medal hopes in this first half of competition now rest with the Women’s Fours. 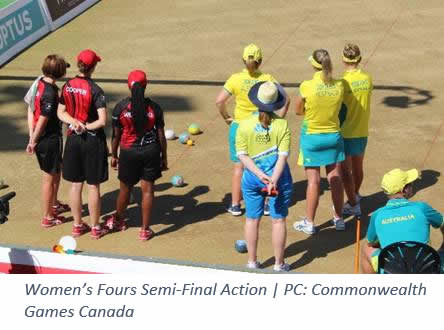 The foursome of Leanne Chinery (Victoria, BC), Pricilla Westlake (Delta, BC), Joanna Cooper (Calgary, AB) and Jackie Foster (Bridgetown, NS) played an outstanding semi-final match against hometown favourites Natasha Scott, Rebecca Van Asch, Carla Krizanic, and Kelsey Cottrell of Australia. The Canadians got off to a slow start, finding themselves down 5-1 after 5 ends before finding their groove. They battled their way back with some brilliant play from each member of the team to tie the game 7-7 after 11 ends.

In an edge of seat nailbiter, both teams traded brilliant shots back and forth with Australia up 9-8 going into the last end. Canada was holding two, with Scott’s last bowl to come. She made a bare jack kill, which saw the jack respotted to the T, where Chinery would draw for one to tie the game and force it to an extra end.  In the sudden death tie-breaking end, Cooper caught a bad break and chipped the jack back to a group of Australian bowls. Westlake connected on both her bowls to leave just one Australian bowl still counting when the dust settled. Unfortunately, Chinery couldn’t quite draw around a group of short bowls, and Australia picked up one for the win. Final score 10-9. After the game, Jackie Foster said, “Our motto was to just play one bowl at a time, and we did that. We stayed patient. “  And that motto is exactly what the  Canadian foursome will focus on when they meet Malta to play for bronze on April 9th at 10:15 pm EDT (April 10th at 12:15 pm local time).  Australia will go on to meet South Africa to battle for the gold.

The Men’s Triples team of Cameron Lefresne (Enfield, NS), Greg Wilson (Calgary, AB) and Chris Stadnyk (Niagara Falls, ON) also faced home town favourites in semi-final action. The Australian trio of Aron Sherriff, Nathan Rice, and Barrie Lester demonstrated that they would be a force to be reckoned with after defeating New Zealand in their quarter-final match. Australia came out with all cylinders firing, and got off to a hot start. Before Canada could blink, they found themselves down 1-10 after just 5 ends of play. Australia continued their ferocious attack throughout the entire game and never took their foot off the pedal. The final score was 20-5 for Australia. “It was a tough game,” said coach Darryl Fitzgerald. “Barrie Lester dominated one hand the entire game. The boys tried their best and gave it their all. Just came up against a very tough team. Australia proved today why they are the best in the world.”
Without much time to reset, the Canadian trio found themselves facing Norfolk Island to play for bronze. After dropping a 5 early in the game, Lefresne, Wilson and Stadnyk settled back into the style of play that brought them to medal contention and the Canadians battled back to tie the game 10-10 after 11 ends. Trading blows for the next few ends, Canada dropped yet another 5 to make it 11-17 with 4 ends left in the game. This proved costly, and despite playing some good bowls, Canada could not make the comeback, giving up to the win to Norfolk Island 19-16.  Australia settled for silver as they fell short to Scotland 14-19.
In Women’s Singles play, Kelly McKerihen (Toronto, ON) played her semi-final match against Wales’ Laura Daniels. Daniels claimed the 2017 Champion of Champions singles title in the fall of 2017 and would prove to be a difficult test for McKerihen. Daniels got off to a good start, getting up 11-3 early. McKerihen clawed her way back to trail Daniels 15-13, but Daniels came alive again. The Welsh bowler would count four consecutive ends to win the game 21-13. 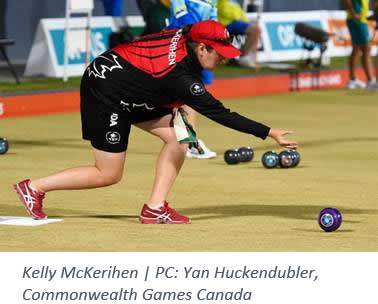 McKerihen played South Africa’s Colleen Piketh in the bronze medal match.  Despite McKerihen’s early momentum which saw her leading 11-4 after 6 ends, Piketh changed the flow of the game in the 7th end where she would go on to score steadily to draw even with McKerihen by the 10th end.  The two players then traded shots back and forth in a nailbiter of a game.  In the 20th end, down two, McKerihen had an opportunity to draw even to force another end, however, came up just shy leaving Piketh with another two and the win.  Final score 21-17 for South Africa.  New Zealand’s Jo Edwards claimed the gold over Laura Daniels in another fantastic display of shotmaking, also in a score of 21-17.

Three teams contending for medals in the first half of the competition represents some of Canada’s best ever results in recent history.  And it’s not over yet.  McKerihen will team up with Leanne Chinery in Women’s Pairs competition starting Tuesday April 10th. The Men’s Triples will be joined by Ryan Stadnyk for Men’s Fours starting Monday, April 9th.  Also on Monday, April 9th, Ryan Bester will start his Men’s Singles campaign and Westlake, Cooper and Foster will jump into Women’s Triples action.