After a week of sunny skies and gusty winds, new champions have been crowned at the 2017 Canadian Singles Championships in Winnipeg, Manitoba. Jerome Kirby (MB) and Mary Wright (BC) will be heading to the 2018 Champion of Champions event in Australia next fall.

Day five of the event started with the quarterfinals for both the men’s and women’s fields. The final four for the men consisted of Kirby, John Bjornson (MB), David-James Smith (QC) and Kevin Dusablon (MB). The semifinalists for the women featured Wright, Marie Taylor (BC), Jordan Kos (SK) and Jan Robinson (AB). 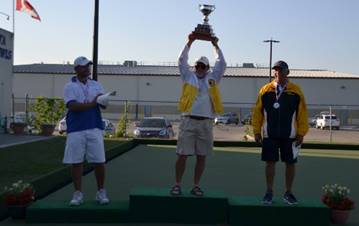 Kirby’s path to the final was challenging as well, as he defeated up-and-coming Carter Watson (SK) in the round of 16, followed by Albertan coach Derek Dillon in the quarterfinals. In the semifinals, Kirby came out guns blazing to defeat Dusablon and secure his ticket to the gold medal match. 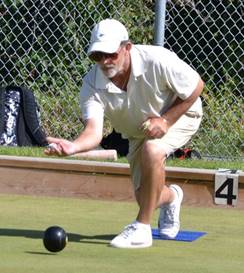 In the finals, Bjornson and Kirby were trading blows back and forth throughout the match. Although Bjornson appeared to put pressure on, Kirby made conversion shots when he needed them most to win in straight sets 7-6 and 7-5.

On the women’s side, Wright was determined to make it back to the finals. The defending champion started the knockout rounds with a tie-breaker win against Claire Day (AB) in the quarterfinals before taking down the top seeded Marie Taylor (BC) in straight sets in the semifinals.

Jordan Kos was also determined to get back to the finals as she defeated Betty Van Walleghem (MB) in the quarterfinals and then took down second place Jan Robinson (AB) in a tiebreaker.

In what would be a rematch of the 2016 finals, Wright got off to a strong start by taking the first set 9-5. In the second set, Kos found her footing and forced a tiebreaker by winning the set 14-5. In the tiebreaker set, Wright grabbed a four ender to all but secure the win 7-2.

Wright and Kirby will represent Canada at the 2018 Champion of Champions event held at St. Johns Park Lawn Bowls Club in New South Wales next fall.

For final results and standings, go to http://www.bowlscanada.com/en/championship/2017champ_singles.html

About the 2017 Outdoor Singles Championships
Over 40 male and female competitors from across the country will compete in this weeklong competition to represent Canada at the 2018 World Champion of Champions in New South Wales, Australia. Competition is being held at Norwood and Dakota Lawn Bowling Clubs in Winnipeg, Manitoba.