The 2017 Mixed Pairs Championships have crowned a winner: Mary Wright and Christie Grahame from British Columbia won gold over Alberta’s Pat Vos and Roy Riege with a 20-16 final.  The Québec-B team of Maurice and Murielle Beauchamp won the bronze over Saskatchewan’s Lois Kos and Brandon Watson in a 25-14 final. 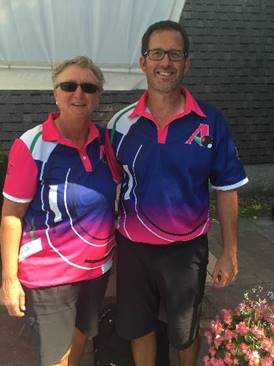 Vos and Riege jumped ahead early in the gold medal game as they took a 5-0 lead in the first two ends.  A single point in the third end gave BC the mat and they didn’t look back.  Immediately moving the game to a short jack strategy, Wright and Grahame took command of the game.  After nine ends, the BC duo had established a lead of 18-5.  In the tenth end, Alberta managed to score a point to take back the mat.  Although Vos and Riege continued to score, Wright and Grahame did not allow them more than one or two points per end and ultimately ran the Alberta duo out of ends for the final score of 20-16.   This is Wright’s second national title in as many weeks as she won the women’s singles championships hosted in Winnipeg, MB earlier in September.  Wright and Grahame also both skipped their fours teams to a bronze medal at the 2017 Canadian Lawn Bowls Championships in August. 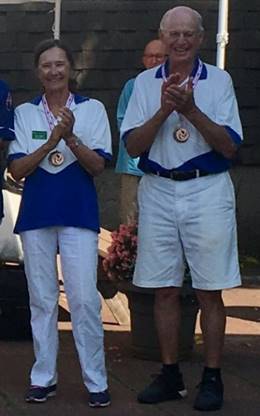 After having a tough final day of round robin play- losing to New Brunswick (9-18) and to Manitoba (11-24), Québec-B was eager to turn their attention to Saskatchewan in the bronze medal round. Skip Murielle Beauchamp got things off to a strong start for the Quebec duo, leading 7-1 after five ends.  In an unfortunate turn of events, Saskatchewan skip Brandon Watson was forced to remove himself from the match after the eighth end due to an injury sustained earlier in the week. As no other player from Saskatchewan was available, host province member David-James Smith was called in as a substitute.  With Kos now in the skip position, Saskatchewan valiantly battled back, managing to close the gap within two points after 13 ends.  In the 14th end, the Beauchamp pair picked up a huge five which Kos immediately countered with a three in the 15th end.  Quebec-B came back with another big score of four in the 16th end and then sealed the deal with another 3 in the 17th for a final score of 25-14.