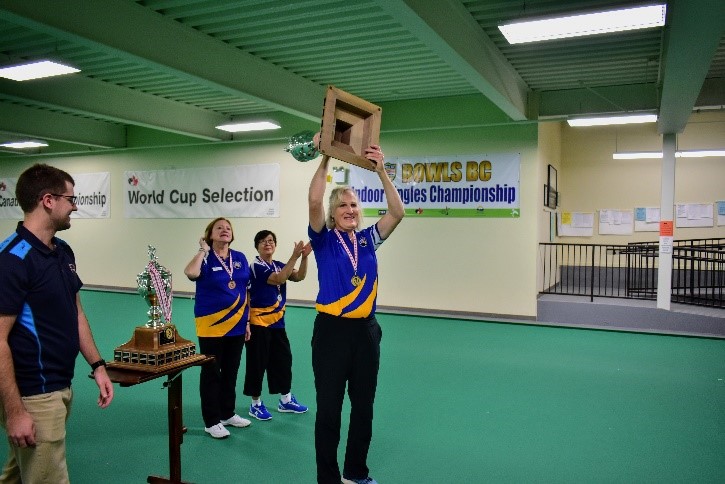 By claiming gold, Bhartu and Charlton have earned the right to compete in Bristol, England from April 20-24, 2020. Bhartu and Charlton will compete in men’s and women’s singles, as well as 2-bowl mixed pairs at the newly revised 2020 World Bowls Indoor Championships.  As the reigning Canadian Indoor Champion since 2016, this will be Bhartu’s fourth consecutive trip to the international indoor championship event.

On the women’s side, 2018 champion Josephine Lee (PIBC, British Columbia) finished in first place with a record of 8-3. Charlton, Elizabeth Cormack (Willowdale LBC, Ontario), Lynn Coules (North Vancouver LBC, British Columbia) and Jenn MacDonald (Calgary LBC, Alberta) all finished with 7-4 records. Charlton advanced to the gold medal match based on winning more sets during the round robin than the other three women. Coules and Cormack would both advance to compete in the bronze medal match on the same premise.

In the gold medal game, Charlton didn’t need the full 9 ends in the first set, winning by a score of 13-1. In the second set, Lee bounced back with a score of 11-4 to force a tie-breaker. In the 3-end tiebreak, Charlton got off to a 3-0 start after two ends. Lee nearly fought her way back, but could only muster two points in the final end to give Charlton the victory and the gold medal.

In the bronze medal game, Cormack and Coules traded blows the entire way. Coules took the first set 8-6, but Cormack responded by taking the second set 10-4. In the tie-breaker set, it was 2-2 after three ends, forcing an extra end. Coming down to a measure after all bowls were played, Coules would come away victorious by a 3-2 score. 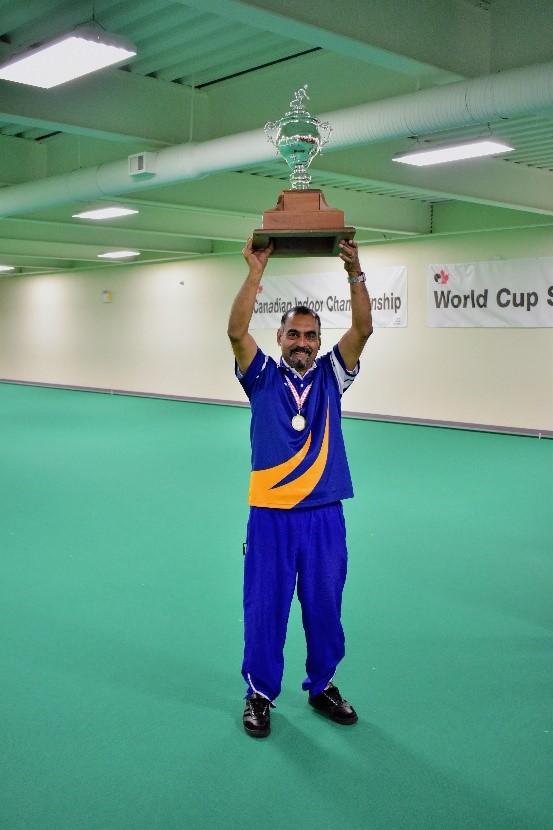 On the men’s side, Bhartu finished the round robin with a 9-2 record to sit tied for first place with Jim Duholke (West Vancouver LBC, British Columbia). Jerome Kirby (Norwood LBC, Manitoba) and Cary Lucier (Windsor LBC, Ontario) would face off in the bronze medal match after each finishing with 8-3 records.

In the gold medal game, Bhartu got off to a quick start, scoring the first 7 points. Duholke stormed back to make it a 7-6 game before Bhartu put the first set to bed with a final score of 13-7. In the second set, it was a back and forth battle, with both players fighting hard. Bhartu would tie the set with Duholke, 5-5, which was enough to win the match and the gold medal.

In the bronze medal match, Kirby and Lucier battled fiercely in a close game. Although both sides entertained the spectators with excellent bowls, Kirby ultimately claimed the bronze, winning the first set 9-5, losing the second set 7-9, and winning the tie-breaker set 3-1.