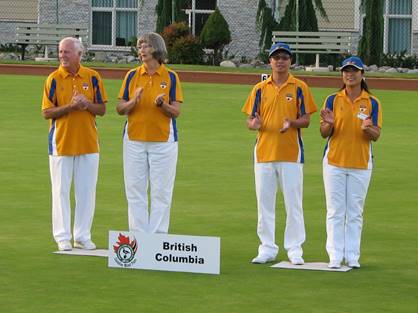 It was the perfect gold medal game to top off an action packed week at the Mixed Pairs Championships in Parksville, British Columbia.  The home pair from British Columbia A, Marlene Cleutinx and Christie Grahame defeated Alberta 20-18, in a game where every bowl counted.  Pat Bird and Heather Mackie from team Alberta were closely behind in the standings in second place throughout the entire round robin.  British Columbia A and Alberta had not played each other since round one, on the first day of competition.

The medal games were the icing on top of what was a spectacular Mixed Pairs Championships.  The Parksville Lawn Bowling Club was very welcoming, as well as the entire community.  The excellent planning and execution made it easy for all the athletes, umpires and team officials to perform at their best throughout the week.

Full results of the Mixed Pairs Championships can be found at:
https://bowlscanada.com/en/championship/champ_mixed.html