The multi-nations test match in Cardiff, Wales has come to a close with Canada securing a bronze medal in women’s fours.

The second half of the event featured women’s pairs and triples as well as men’s singles and fours. 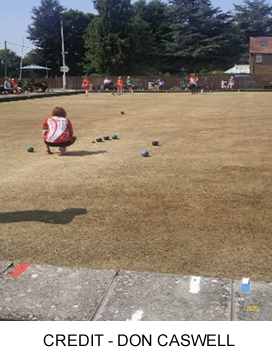 Women’s Pairs
Canada’s Jackie Foster (Bridgetown, NS), and Joanna Cooper (Calgary, AB) represented Canada well in the women’s pairs. The duo started the event with a 19-14 victory over USA. After tough losses to Ireland and Malaysia, the Canadians bounced back with a win over Spain to finish the round robin at 2-2. This was enough to get into the quarter-finals where the Canadians would face a fierce South African pair. Despite some well-played bowls, South Africa emerged victorious with a final score of 20-8.

Women’s Triples
Baylee van Steijn (Gore’s Landing, ON), Jordan Kos (Regina, SK), and Shirley Fitzpatrick-Wong (Winnipeg, MB) represented Canada in the women’s triples. The opening round was a nail-biter as Canada faced the hometown Wales team. In a battle to the last end, Wales snuck away with an 18-15 victory. The Canadian trio left nothing to chance in the next round and defeated Spain with a convincing 25-8 win. After a tough loss to Australia, the Canadians closed out the round robin with a 21-13 victory over the tough Malaysian trio. Finishing at 2-2, the women’s triples team also managed to make it to the quarter-finals. Despite their best efforts, Canada came up short against Jersey, losing 18-9.

Men’s Fours
On the men’s side, Grant Wilkie (Saskatoon, SK), Owen Kirby (Kitchener, ON), Lucas Caldwell (Peterborough, ON) and Michael Pituley (Regina, SK) teamed up for the men’s fours event. The Canadians started off strong with a 13-11 win over Wales. After a tough loss to Ireland in the next round, Canada rebounded with a 15-13 victory over Namibia. The Canadians would finish the round robin with a difficult loss to Australia to finish the round robin at 2-2. Despite being tied for 3rd in the group, their shot differential was not enough to break into the quarter-finals. 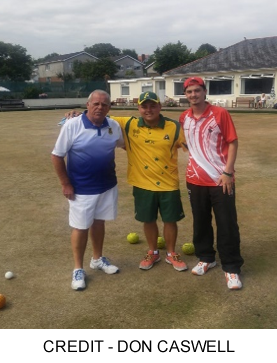 Braeden Campbell (Paradise, NS) was tasked with competing in the men’s singles event. Right off the bat, Campbell was in for a challenge against Malaysia. In a fight to the finish, Malaysia barely snuck out the win, 21-20. To follow that up, Campbell then faced Australian phenom and 2015 Australian Open Singles winner, Aaron Teys. A tall order for Campbell’s first international experience, the Canadian held his own and nearly came away with the victory. In the end, Teys came away with a 21-15 win. If that wasn’t difficult enough, Campbell was then pitted against Ireland’s Gary Kelly in the following round. Kelly was a quarter-finalist at the 2018 Commonwealth Games and used his experience against the international rookie with a 21-10 win. To cap off the event, Campbell gave it his all against Namibia but could not quite find the light at the end of the tunnel with a 21-15 defeat.

Results
Despite earning just one medal, Canada came away with a bronze medal in the women’s fours in the first half the competition. This was a great experience for Canada’s next generation of future international stars.  Canadian athletes held their own against a field full of World Bowls and Commonwealth Games Champions.  The Canadian high performance program and developing talent within it was remarked upon by all of the other nations in attendance as a promising sign of what the future holds for Canadian bowls.

Full results and end by end updates are located at https://tinyurl.com/ybrq7nvm