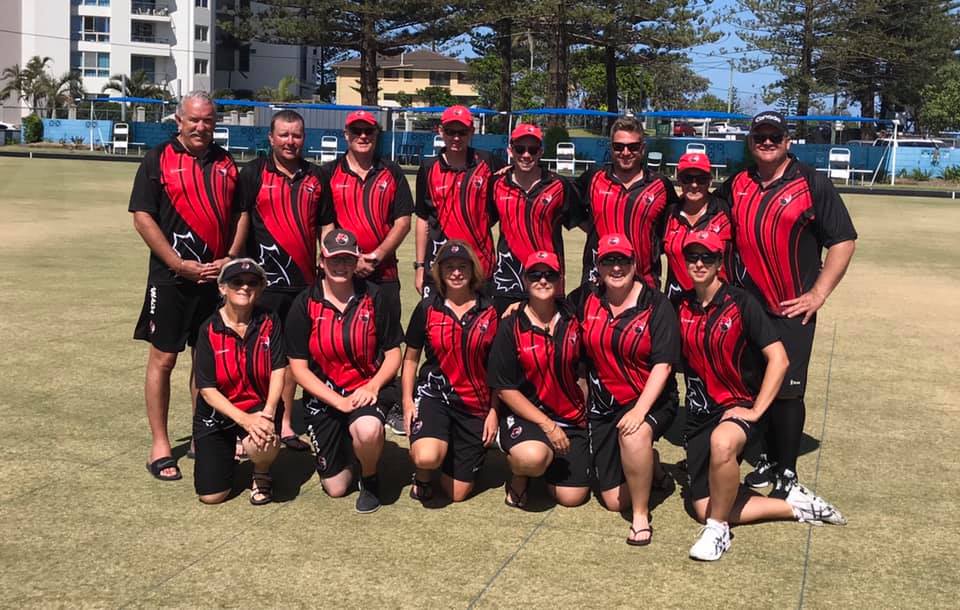 The 2019 Multi-Nations Event in Gold Coast, Australia has come to a close, and Canada will be coming home with three medals. Ryan Bester and John Bezear claimed gold in the men’s pairs, Kelly McKerihen claimed silver in the women’s singles, and Bester took home the bronze in the men’s singles. As a preparation event for the World Bowls Championships in 2020, Canada did well to medal in three disciplines at this event, especially considering they faced teams from Australia, Ireland, Malta, New Zealand, Norfolk Island, South Africa, and Wales. 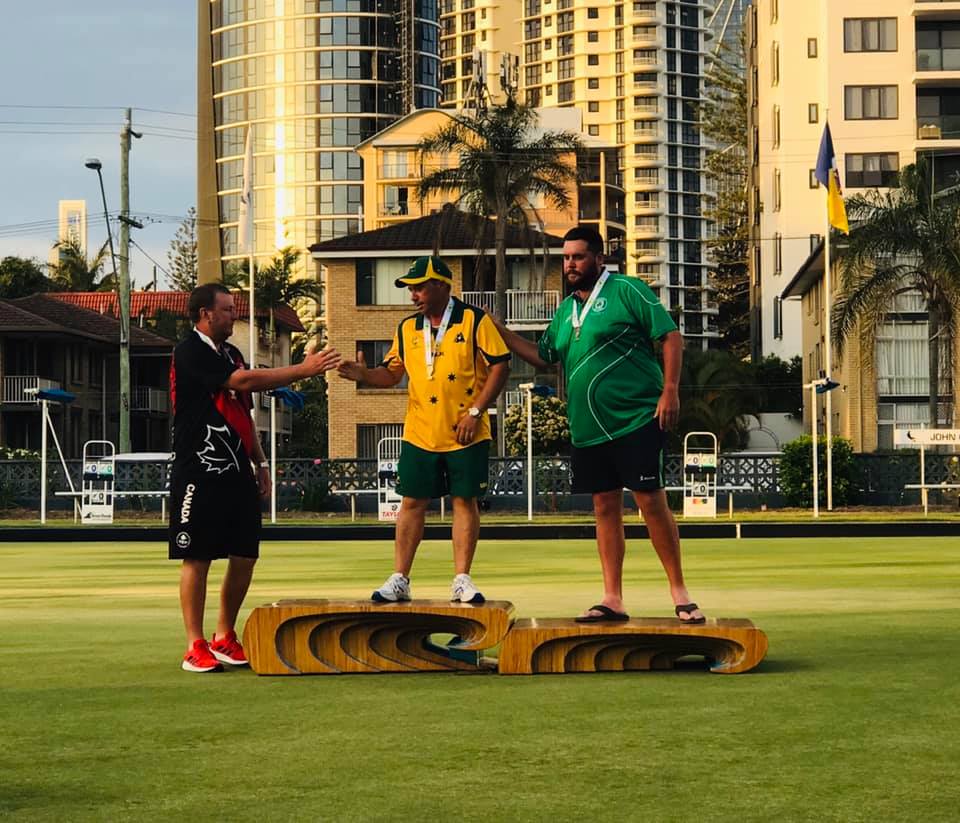 Ryan Bester (Hanover, ON), current Broadbeach local, represented Canada well in the Singles. After getting off to a slow start on the first day, losing two matches to Australia, Bester turned it around to finish with a record of 4-3 to force his way into the semifinals. In the semis, Bester lost a tough match to Australia’s Ray Pearse 21-17 to send him to the bronze medal match. In the battle for bronze, the Canadian got his revenge on Australia’s Aaron Wilson, claiming the bronze medal by a score of 21-15. 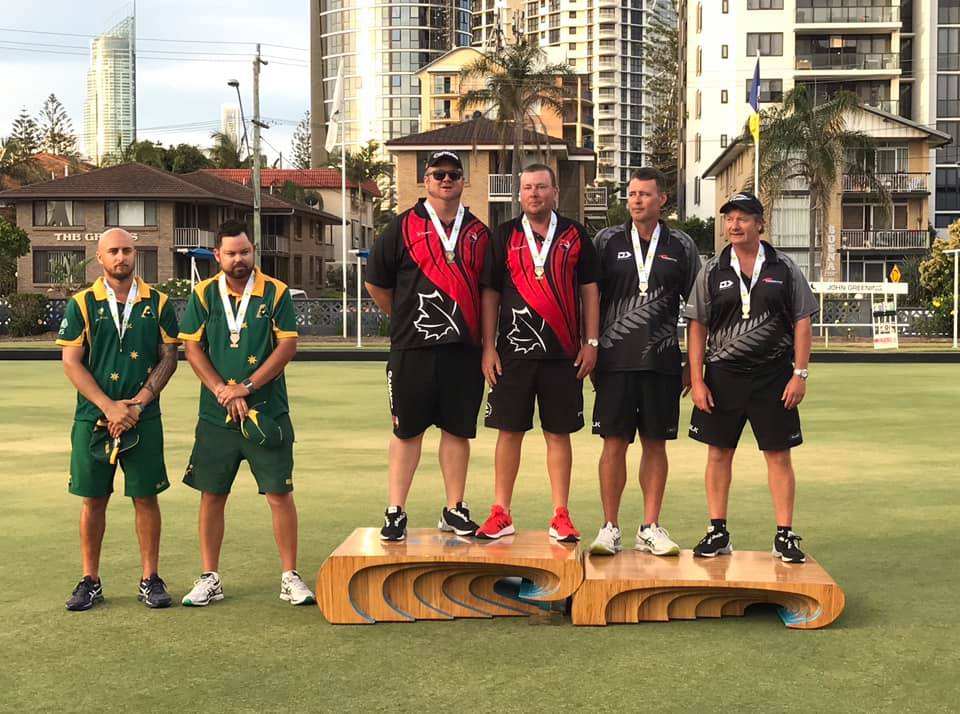 John Bezear (Toronto, ON), formerly from Australia, teamed up with Bester to compete in the men’s pairs discipline. Bezear and Bester have had success on the international stage before, winning a bronze medal for Canada at the 2012 World Championships in men’s pairs. It took some time for this duo to find their groove again, getting off to a slow 0-3 start to the event. The two Canadians turned it around and didn’t lose another game for the remainder of the event. In the semifinals, the Canadians took down Australia’s Jesse Noronha and Aaron Wilson 15-13 before claiming gold over New Zealand’s Jamie Hill and Gary Lawson, 17-12.

Men’s Triples
Cameron Lefresne (Enfield, NS) and Greg Wilson (Cochrane, AB) teamed up with Rob Law (Winnipeg, MB) in the triples. With this being the first international event that the trio have played together, it was a tough challenge from the beginning. Despite some well-played bowls, this triples team only managed to pick up victories against Norfolk Island and South Africa. With a record of 2-5, it was good enough for 6th place out of a prestigious 8 teams.

Men’s Fours
Lefresne, Wilson, Bezear and Law joined forces in the men’s fours. After an impressive 16-9 victory over New Zealand in the 2nd round, the men struggled to click the rest of the event. The Canadians finished on a high note with a 22-10 victory over Malta to finish with a record of 2-5. This was a good learning opportunity for a team that had not played together previously. 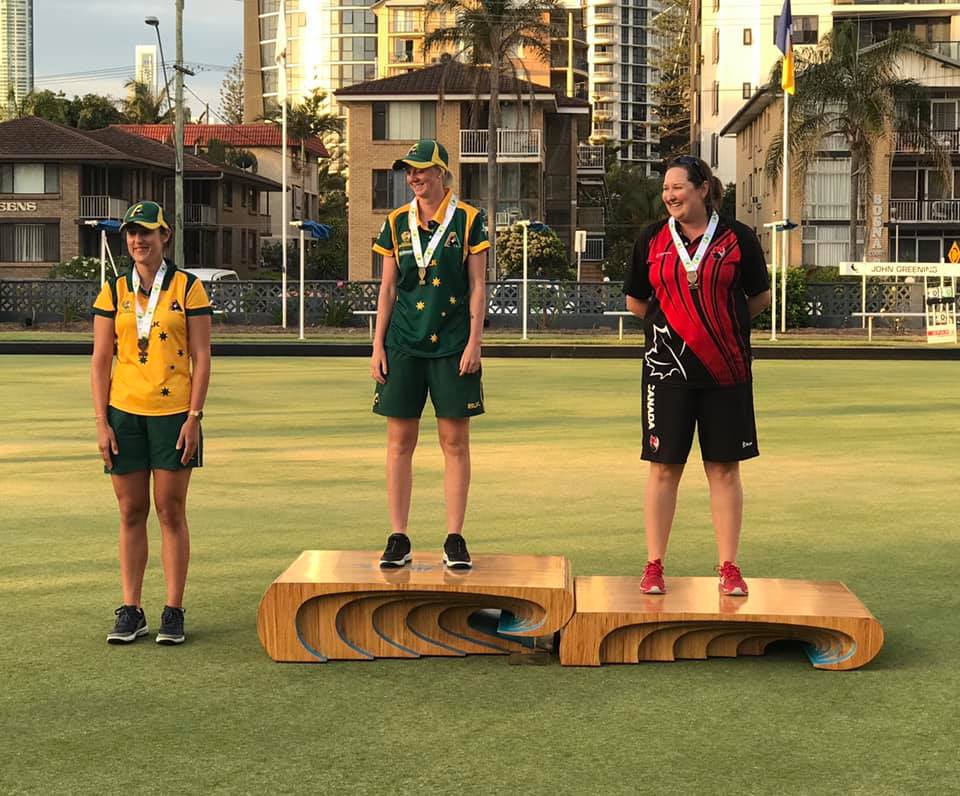 Kelly McKerihen (Toronto, ON) represented Canada once more in the women’s singles discipline. After a 4th place finish at the Commonwealth Games, followed by a quarter-final exit at the Asia Pacific Championships, McKerihen was hungry to make it to the podium. Not surprisingly, McKerihen did just that. After losing the first two games of the event to Australia Green and New Zealand, McKerihen ran the tables to go 5-2 in the round robin. In the semifinals, she would have her revenge on New Zealand’s Jo Edwards to make her way to the gold medal match against Australia’s Ellen Ryan. In the gold medal match, Australia’s Ryan proved to be too much, taking gold over the Canadian 21-4.

Women’s Pairs
McKerihen teamed up with Joanna Cooper (Calgary, AB) in the women’s pairs. After a tough first day, the women bounced back with wins over Ireland and Wales to improve their record to 2-5 for the event.

Women’s Triples
Leanne Chinery (Victoria, BC), Jordan Kos (Regina, SK), and Jackie Foster (Bridgetown, NS) reunited as Canada’s women’s triples team. This trio went 6-2 at the Asia Pacific Championships, and were eager to improve their international performance. Despite an excellent performance, this trio just could not get the right bounces, losing three of their matches by 2 shots or less. Despite having a final record of 3-4, this trio easily could have gone 7-0, and should be excited about their performance going into the 2020 World Championships next June.

Women’s Fours
Chinery, Kos, Cooper and Foster formed Canada’s women’s fours team. This squad struggled to get going, losing their first five matches before finding their groove with wins over South Africa and Malta to finish the round robin. Despite the slow start, this fours team showed they can compete at the highest level and represented Canada well.