Canada’s Kelly McKerihen (Toronto, ON) battled defending champion Karen Murphy from Australia in the women’s singles semi-finals at the 2016 World Bowls Championships. McKerihen finished first in her pool to receive a bye to the semi-finals, while Murphy had to defeat Malaysia’s Siti Zalina Ahmad (21-14) in the preliminary playoff round. During the round robin, Murphy handed the Canadian her only loss, narrowly winning with a score of 21-20.

In what was a hard fought grudge match, McKerihen came out guns blazing to score a perfect end to start the game. After scoring another one to make it 5-0, Murphy retaliated with 6 unanswered points to take the lead. The game went back-and-forth for several ends until Murphy managed to pull ahead for an 11-7 lead. McKerihen didn’t let Murphy get too far ahead, as she battled back to make it 11-10. The two battled for several more ends, exchanging single points until Murphy tried to pull away again, this time getting up to 17-14. McKerihen dug her heels in and rebounded to bring the game back to a nail-biter with a 17-16 score. Continuing to exchange blows, Murphy started to smell victory by stretching the score to 20-17. Kelly wasn’t about to give up, scoring three singles in a row to tie the game 20-20. 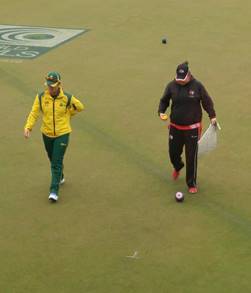 The Canadian started the last end off hot, but it was Murphy who put the pressure on. Lying shot, the Australian decided to get a back bowl with her third and cover the spot. Kelly drove with her last bowl, trying to remove the single Australian shot, but got an unfortunate result by killing the jack. Since the respot rule is used, the jack was placed at the two-metre mark and Australia’s Karen Murphy won the match 21-20. Murphy will face Scotland’s Lesley Doig in the gold medal match.

McKerihen, a member of Etobicoke Lawn Bowls Club in Toronto, Ontario and both Caulfield Park Alma and Clayton Bowls Club in Australia, receives a bronze medal for the semi-final loss. Next up for McKerihen is the triples, where she will skip fellow Canadians Leanne Chinery and Pricilla Westlake. Their first match is Monday, December 5th against Wales.