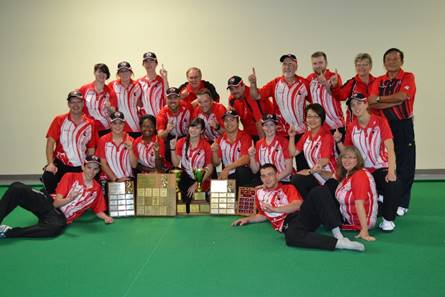 After an exciting three days, Canada has won the overall competition against the United States here at the North American Challenge Lawn Bowls Championship.

Halfway through the competition, Team Canada and Team USA were all tied up. The Canadian squad improved exponentially as the tournament went on, as players gelled and learned to play together.  By day three the teams displayed skillful play and shot making. 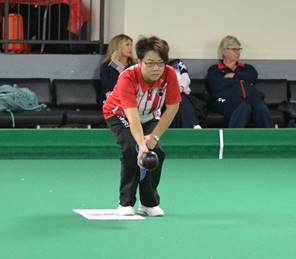 The Women’s Fours Jarvis team front end of Stirling Wood (Midland, ON) and Nicole LeBlanc (Uxbridge, ON) stepped up to perform for their team.  They played solid front end bowls, keeping the US front end under pressure for the majority of the game.  Jenny Siu (Burnaby, BC), stepped into the role of skip, after the departure of Sue Roth due to a family emergency.  Siu played with confidence and gave her team assurance.  With Wood and LeBlanc playing so well, Siu was in a position to play the aggressive shots required to win.

“We played really well as a team, with every member contributing to our best win of the tournament,’ said Manager Jean Roney (substitute for Sue Roth).

Despite a shaky start to Day 1 of play, the Women’s Jarivs Team continued to improve and close the gap, ultimately missing the overall Women’s Jarvis title by only three points. 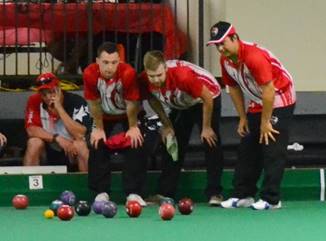 Skip, Steve McKerihen (Toronto, ON) and vice, Steven Santana (North Vancouver, BC) of the Men’s Fours Jarvis team continued to play accurate and aggressive shots.  With the communication between the front end of Lucas Caldwell (Peterborough, ON) and Adam McKerihen (Halifax, NS) with the back end, the entire team contributed to the strategy of play.

The Men’s Folkins Fours team of Chris Stadnyk (Niagara Falls, ON), Darryl Fitzgerald (Kitchener, ON), Rob Law (Winnipeg, MB) and Owen Kirby (Kitchener, ON) ended the tournament on a high with their win over US Folkins.  “I was incredibly proud of Law and Kirby.  They made my job easy today,’ said Stadnyk.

For the full results and more information on the North American Challenge please visit: https://bowlscanada.com/en/hp/nac.html.