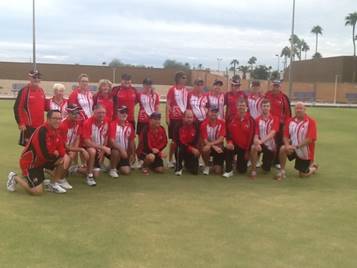 Canada started off strong on Thursday with the Triples and Pairs, quickly pulling ahead of the Americans.  On Friday, the Americans had a big afternoon, winning all but one match of the Fours and Singles and closing the gap in the overall standings.  It all came down to Saturday’s matches to determine which country would be victorious.

At the end of the competition, Canada had a big win in the Folkins division, beating the Americans 31-15 overall.  The Jarvis division came down to the last game and Canada narrowly won with a score of 26-24.  The overall title is a combination of these two scores, giving Canada the go ahead and Champion title with a final score of 57-39.

The entire team played together as a unit and proved that all the hard work and dedication put in before the event paid off.  While there were celebrations all around after winning the entire competition, there were also some other highlights especially for Katelyn Brierley of Team Jarvis, as this was her first international win.
Davie Mathie, Team Canada’s coach was pleased with the results; “We worked together as a team and our efforts paid off.  We came out strong like we planned and maintained our dominance throughout the competition.  The Americans played hard and gave us a run for our money at the end, but we stayed focused and came out on top”.

All the results can be found at: www.scdlawnbowls.org

ABOUT BOWLS CANADA
Bowls Canada Boulingrin (BCB) is the governing body responsible for bowls in Canada.  The BCB mission is to promote, foster and safeguard the sport of outdoor and indoor bowls in all its forms across the country.  BCB is committed to the highest standards for the conduct and development of bowls in Canada.