The reigning Canadian singles champion Michael Leong is set to begin his long journey to the Naenae Bowling Club in Wellington, New Zealand. This will be the first Champion of Champions event that World Bowls has hosted since the start of the pandemic. After cancellations in 2020 and 2021, Michael has been patiently waiting for his turn to represent Canada at the international stage amongst the best bowlers in the world. The championship begins November 19th to the 26th.

As COVID has left us waiting for this championship for 2 years now, let us all be reminded on how Leong got to hoist the singles 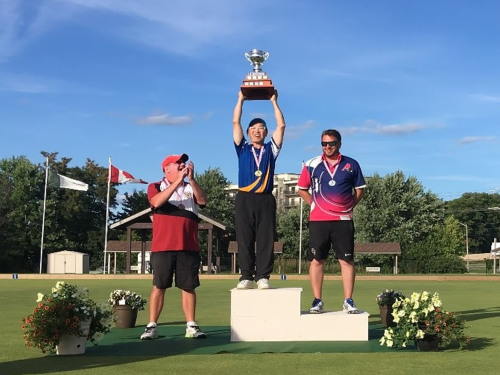 championship trophy back in 2019. The 2019 Canadian Singles Championship took place at the Heritage Greens Lawn Bowling Club in Kitchener, Ontario. After navigating pool play, Leong had a tough semi-final match going up against David Anderson where Anderson got off to an early lead. Leong managed to stay focused and complete the comeback winning the match by 1 point with a score of 21 – 20. Making his way to the finals, Leong had to battle Greg Wilson where his consistent play resulted in once again, a 1-point victory over Wilson with a score of 21-20. Leong had officially punched his ticket to the World Bowls Champion of Champions.

For the past two years, Michael has been working with Regional Coach Mary Wright to prepare for this event.  Focusing on skill development and tactics for the southern hemisphere, Wright was able to use her experience as a past Champion of Champions representative to ensure Leong was ready for the competition. Wright believes that Leong’s composed and consistent style of play is well suited for the fast and often windy New Zealand greens.

As reigning women’s champion, Ontario’s Cathy Larking was also scheduled to represent Canada at this event, but personal circumstances unfortunately forced her withdrawal.  No alternates are allowed at this event.

About World Bowls Champion of Champions

The World Bowls Champion of Champions is an event inaugurated in 2003 that is contested annually between bowlers who have won their respective national singles title. The 2022 event is being hosted at the Naenae Bowling Club in Wellington, New Zealand from November 19-26.