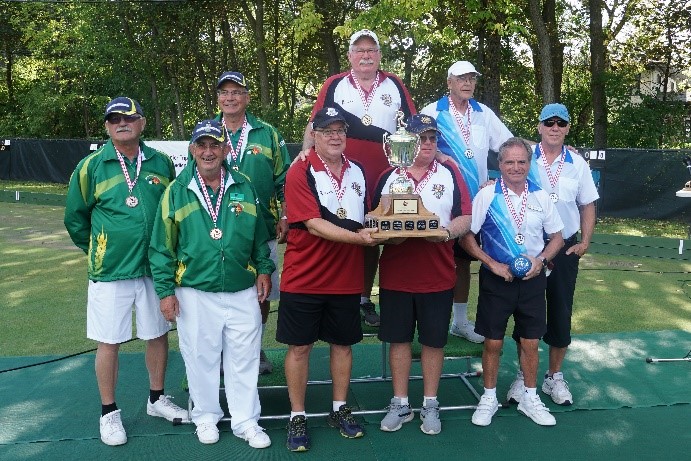 Ontario will be coming home with gold in both the men’s and women’s disciplines at the 2019 Canadian Senior Triples Championships. After competing for four days at the Beaconsfield Lawn Bowling Club, the men’s squad of Wayne Wright, Don Caswell, and Tom Roth as well as the women’s squad of Kathy Smith, Val McWilliams, and Pat Kostecki will be bringing home gold medals.

Competitors from eight different provinces competed at the Beaconsfield Lawn Bowling Club from September 13-17. At the end of the round-robin, it would be Ontario-B and Quebec-A’s Wayne Hossack, Gilles De Serres, and Gilles Cayer at the top of the leaderboard on the men’s side. On the women’s side, the defending champion team of British Columbia’s Mary Wright, Donna Blackstock, and Ann Van Bastelaere were tied for the top spot with Smith’s Ontario-A team.

After losing to Hossack’s team in the first game of the round robin 15-13, it was a grudge match in the gold medal game for Wright and company. Holding nothing back, the Ontarians cruised to a 25-3 victory in the final match to claim the gold. In the bronze medal game, Saskatchewan (Doug Lambert, Garth Zummack and Bo Kos) narrowly took down Alberta (Roger Allen, Paul Maskall, Jim Campbell) by a score of 18-15.

It was a tremendous battle between Smith and Wright on the women’s side. 2019 represented Smith’s third consecutive year that she’s managed to make it out of the tough Ontario playdowns to represent the province at the Senior Triples Championships. With Wright coming out of an equally tough BC playdown experience and looking to improve on her 2018 Senior Triples silver medal, this match had the makings of a fierce competition and it did not disappoint.  In a game that saw the lead trade back forth throughout play, BC fell just short of the finish line, with Ontario taking the match 12-11 on the final bowl of the game.  In the closely contended bronze medal game, Manitoba’s Brenda Frank, Donna Gobeil and Barb Heinrichs defeated the ON-B team of Rosalie Parsons-Brown, Sandra Jefferies and Cheryl McBain 16-13.

For full standings and results: https://bowlscanada.com/en/championship/2019champ_senior.html