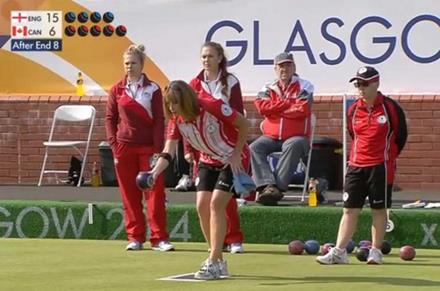 All 12 Canadian lawn bowlers were in action on days one and two of competition at the Commonwealth Games, with the team capturing a total of five victories and eleven losses over the course of a packed two days of competition at beautiful Kelvingrove Lawn Bowls Centre.

Canada’s men’s triples (Kevin Jones (London, Ont.), Chris Stadnyk (Niagara Falls, Ont.), Tim Mason (Penetanguishene, Ont.) started out strong with a win over Norfolk Island 18-11. In their second match of the day, they fell to Jersey 10-28.  Round 3 saw the men lose a hard fought match to Guernsey 16-18.  The Canadian men wrapped up day 2 of competition with a loss to New Zealand 16-20.

The men’s pairs (Ryan Bester (Hanover, Ont. and George Whitelaw (Victoria, B.C.) also started strong with a win 20-15 over Samoa in Round 1.   Unfortunately, Papua New Guinea had an excellent match in Round 2 and beat the Canadian pair 16-10.  Day two did not start well for the men’s pair with a devastating loss to Malta 6-20.   Not to be kept down for long, Bester and Whitelaw rallied to complete day two of competition with a victory over Malaysia 14-13.

In mixed pairs B2/B3 (visually impaired) action, the team lost to South Africa 5-23 in their first match.  The team was able to rally for Round 2 where they defeated Malaysia 16-8.  Unfortunately, a Round 3 loss against New Zealand (10-20) meant the pair did not advance to the semi-finals.  The Canadian mixed pairs are comprised of Al Hanet (Kelowna, B.C) with guide Vi Hanet (Kelowna, B.C.) and Heather Hannett (Calgary, Alta.) with guide Susan Acorn (Calgary, Alta.).