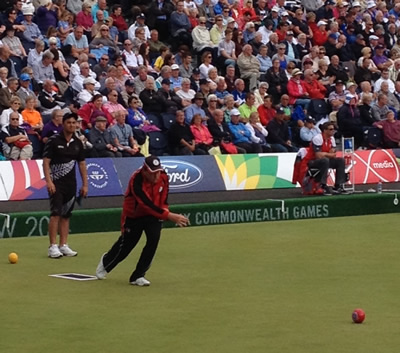 Canada’s men’s singles lawn bowler Ryan Bester took advantage of his deadly accuracy and clever reading of the greens to defeat opponents from Zambia and New Zealand today, earning himself a berth in the gold medal match set for Friday.

Bester, of Hanover, Ont. defeated Zambia’s Harry Musonda 21-5 in the quarter-final and then defeated his friend Shannon McIlroy of New Zealand in the semifinal 21-10.

It’s never easy, I just picked the green up quite early,” said Bester. “Me and Shannon are really good mates, it’s always hard playing really good friends. I’m playing OK, so the old cliché, one game at a time. My goal is always gold, so it’s one game away.” 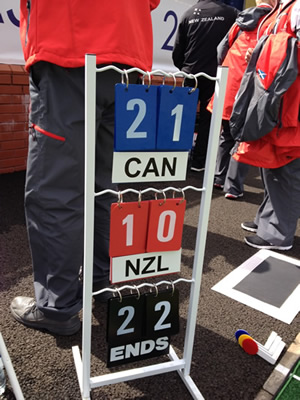 Despite a brief but very heavy downpour in the hour before his match, Bester was able to adapt to the constantly changing condition of the grass playing surface.

“Especially a bit later on in the day, the one side got a bit quicker than the other side, so whoever adjusted first [had the advantage],” Bester said. “I actually think the green ran a bit better with a little bit of water on it. There were dry patches a bit last week so it was a bit smoother.”

His plans to get ready for the big game? “I’m just going to relax and have dinner with the guys and tomorrow it’s at 5:45 [opponent to be determined], so have a sleep in and just get myself ready for the game.”