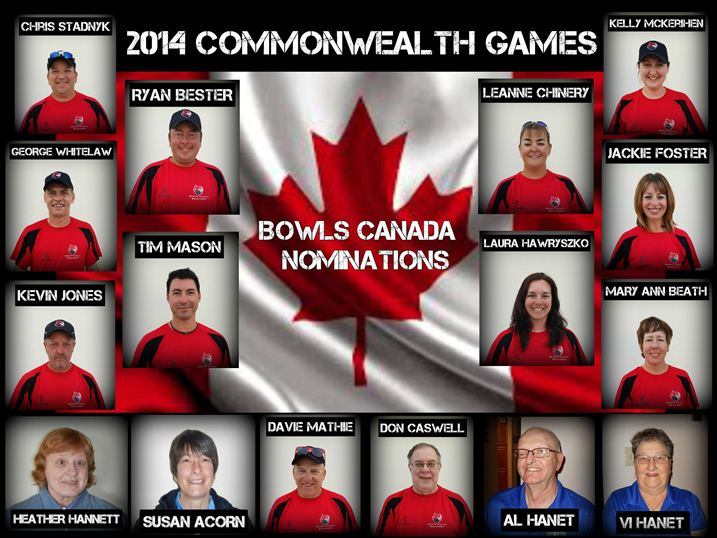 World Silver medallist, Ryan Bester, has been nominated to play Singles for the Canadian lawn bowls team next month at the Commonwealth Games in Glasgow, Scotland. This will be his fourth straight Commonwealth Games, having competed in Manchester (2002), Melbourne, (2006), and Dehli (2010). He is looking to better his 2006 Games Singles Bronze medal result this summer. Bester is the second youngest member of this team, having made his Commonwealth Games debut at the age of 18.

On the Women’s side, it is three-time Under 25 Canadian Champion and Women’s Singles World Medalist Kelly McKerihen being nominated for Canada’s Singles play. At 27 years of age, this international veteran is the youngest member of Bowls Team Canada in Glasgow.

The team will be coached by Canadian Head Coach David Mathie of Victoria, BC.  Mathie coached the 2012 World Championship team to three medals, which was tied for an all-time best result at this event.  “We are heading into Glasgow with a depth and quality that means Bowls will join the rest of the Canadian team in the hunt for medals. Let the Games begin!” said Head Coach Mathie.

Mathie will share his leadership duties with Don Caswell of Windsor, ON.  They were both team staff members at the 2013 Eight Nations Commonwealth Games Invitational Bowls Championship in Glasgow, Scotland where the Canadian team picked up two medals against the world’s best bowls nations.  “I am very excited about the make-up of this team,” says Caswell.  “With the incredible mix of expertise and experience found amongst these athletes, we are confident that Team Canada will be represented on the podium in Glasgow.”