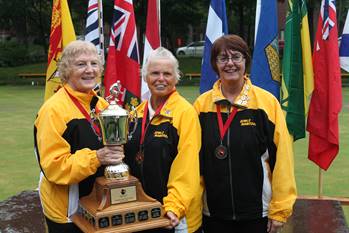 After a week of exciting action and many competitive teams, the winners have been decided at the 2014 Seniors Triples competition in Westmount, Quebec.   Despite the rain, it was a great event and the results were impressive all around.

For the men, it was Nova Scotia who came out on top beating top ranked Alberta 14-10 in the final match.  Nova Scotia and Alberta were tied with 14 points after the round robin.  Manitoba finished with the bronze medal over New Brunswick.  Jack Robar, the skip for team Nova Scotia was pleased with the result; “I want to thank my team” he said after winning the Triples title.

On the women’s side, Manitoba defended their title with a close victory over Ontario A in the gold medal match.  Manitoba won 10-9 and skip Elaine Jones admitted to having some tough competition this year; “

There was a lot more pressure to win the gold medal back to back but it felt amazing”.  British Columbia won the bronze over Nova Scotia .

Full results of the Seniors Triples can be found at:
https://bowlscanada.com/en/championship/champ_senior.html