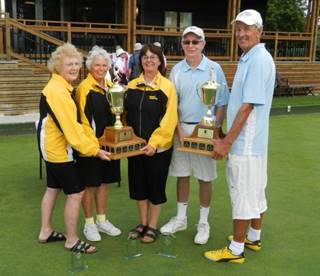 Just over a week after the winners were crowned in Winnipeg at the Canadian Championships, it’s the Seniors Triples time to shine.  Eight provinces will be represented at the Championships in Montreal starting Monday, with Ontario and Quebec having two teams in both the men and women’s competition.  That’s 10 of the best men’s and women’s triples teams in the country vying for the national title.

The competition will take place at Westmount Lawn Bowling Club in Montreal, Quebec and run from Monday, September 1st until Saturday, September 6th.  Nine rounds will be played before entering the medal games, where the bronze medalist will be decided Friday and the gold and silver on Saturday before closing ceremonies.

The 2013 women’s Triples champions Elaine Jones, Clarice Fitzpatrick and Betty Van Walleghem of Manitoba will be back and looking to defend their title again this year.  In the men’s competition, last year’s winners from Nova Scotia will not be returning this year and the title of champion is up for grabs.

Full results of the Seniors Triples can be found at:
https://bowlscanada.com/en/championship/champ_senior.html