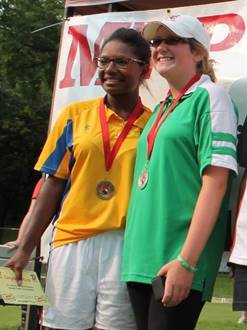 Westlake defeated Jordan Kos (SK) in straight sets 7-3, 7-3 to take the Junior Girls title.  “It was so great to be able to successfully defend the title in my last year of being a Junior”, said Westlake. She won the title for the first time in 2013 in Fredericton, NB.  Westlake is coached by Stephen Forrest. 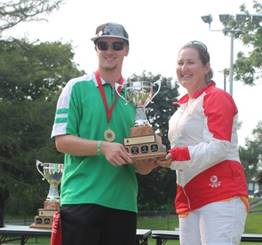 Brandon Watson faced Manitoba’s Nathan Jacobucci in the Junior Boys gold medal match.  Watson dropped the first set to Jacobucci 6-8, but battled back to win the second set 10-3 and eventually take the tie-breaker 6-0.  “It is an unbelievable feeling to win the Championship in my last year of eligibility,” said Watson, who is coached by Michael Pituley.

Both Watson and Westlake were awarded with a set of Taylor Bowls from sponsor MVP Sports, long-time supporters of Junior bowlers in Canada. 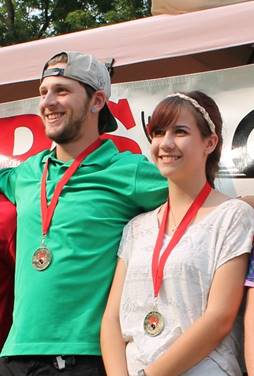 The women’s side saw Stirling Wood of Midland, Ontario face off against BC native Jaymee Sidel.  Wood took an early lead in the first set and refused to give it up leading her to a straight sets victory 11-4 / 11-5.  “Jaymee played great today which meant that I had to really focus on my own game and make each bowl count,” said Wood.  “I am so thrilled to be representing Canada in Australia this November!” Wood is coached by Andy Caldwell.

It was a shot by shot competition on the men’s side as Saskatoon’s Grant Wilkie and Chesley (ON) native Jake Schuknecht battled it out for the chance to represent Canada.  Wilkie took the early lead with a 6-4 win in the first set.  Schuknecht came back strong in the second set with a 9-2 win.  It was an exciting tie-breaker for the spectators as both men played strong bowls, but in the end, Wilkie prevailed with a score of 3-1.  “Words cannot describe how happy I am right now,” said Wilkie.  “To be representing my country and following in the footsteps of my coach and mentor Alex Scott is an incredible honour”.

All four athletes will be back on the greens on Sunday as they play for the 2014 Under 25 Canadian Championship title and a chance to win a second opportunity to represent Canada when the World Junior Championships are staged again in early 2015.

“It has been a fabulous tournament,” said Bowls Canada Executive Director Anna Mees.  “The quality of bowling by these young athletes has been absolutely incredible.  It is very exciting to watch the future of the sport unfold on the greens here at the Etobicoke Lawn Bowls Club”.

Full Junior Championship results can be found at:  https://bowlscanada.com/en/championship/2014_Junior/2014Junior.html

Full 2014 World Junior Championship Qualifier results can be found at: