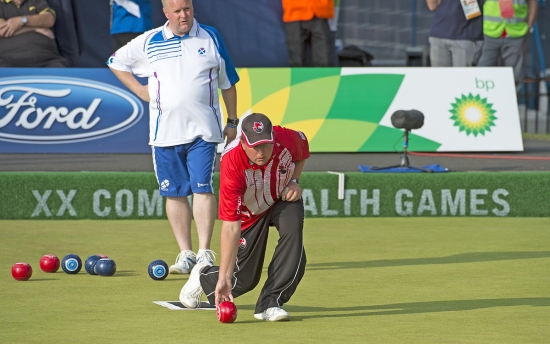 Canada’s Ryan Bester bowled to a silver medal today – the last silver medal won by Canada in men’s singles was won 80 years ago by W.S. MacDonald at the 1934 Commonwealth Games held in London, England.

Bester, of Hanover, Ont., took an early lead but then Scottish opponent Darren Burnett surged ahead and was first to reach 21, at which point the match ends.

Burnett won 21-9, to the delight of the packed crowd.

“I’m still quite happy with silver, playing Scotland,” said Bester. “They’re on these greens all the time and Darren won the world indoor singles title, he’s one of the best players in the world. He got out to a good lead, I was a bit chasing and that’s pretty hard to do.”

Under a hot afternoon sun, the packed stands were a fitting finale to a spectacular lawn bowls tournament at Kelvingrove.

Bester, age 29 but already at his fourth Commonwealth Games, vowed to continue his quest to win the gold in four years’ time. Now a resident of Australia, his home club, Broadbeach Bowls Club on Australia’s Gold Coast, will host the 2018 Commonwealth Games lawn bowl competition.

“I still have a few years left to try to win it,” Bester said. “At the end, silver is brilliant. Canada has never won the gold in lawn bowl so that’s my goal.”