Best Ever Start for Canadian Bowlers on the Gold Coast 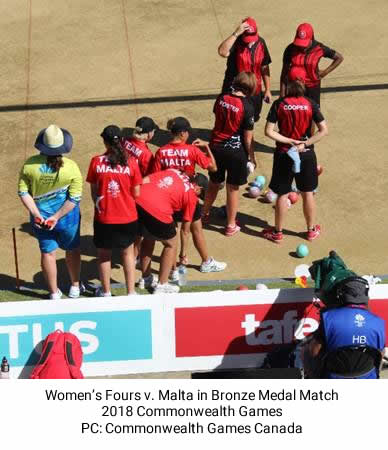 With two teams already finished in the top four at the 2018 Commonwealth Games, the Canadians started Day 5 of competition back in the hunt for another podium opportunity at the beautiful Broadbeach Bowls Club competition venue.

The Canadian Women’s Fours team of Leanne Chinery (Victoria, BC), Pricilla Westlake (Delta, BC), Joanna Cooper (Calgary, AB) and Jackie Foster (Bridgetown, NS) played Malta for bronze in hopes of bringing home Canada’s first bowls medal at this Games. Canada started off hot by scoring 3 in the first end and was up 5-3 after the first five ends of play. Malta got back in the game over the next five ends and led 9-8 after ten ends. After that, it was all Malta as they put pressure on Canada in each end. Canada couldn’t convert and gave up multiple ends of three. With two ends to go, Malta was up 16-8, which was too large a gap for Canada to overcome. The final score was 17-8 for Malta.

This top four finish in Women’s Fours, along with a fourth in Men’s Triples by Cameron Lefresne (Enfield, NS), Greg Wilson (Calgary, AB) and Chris Stadnyk (Niagara Falls, ON) and a fourth in Women’s Singles by Toronto’s Kelly McKerihen represents one of the strongest starts ever in recent history to a Commonwealth Games lawn bowls competition.  “As we move into the second half of the event, I am sure that the team will build on the experience gained so far”, said Head Coach Terry Scott.  “The athletes have competed and presented themselves well both on and off the green and I am confident in their success moving forward.”

Day 5 was turn over day in the Bowls Competition with the final medals being awarded for the first half events and the second half events getting started in sectional play.  For the remainder of the competition, Canada will compete in Men’s Singles, Men’s Fours, Women’s Triples and Women’s Pairs. 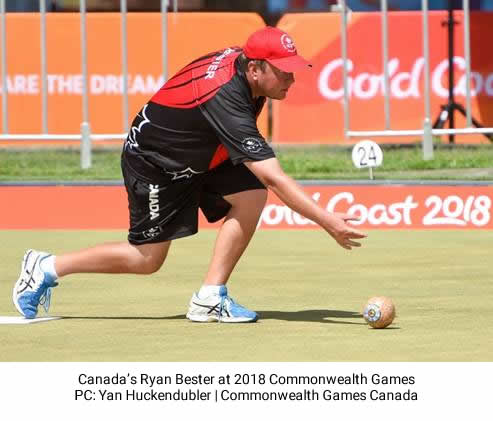 Men’s Singles got off to an excellent start with Canada’s Ryan Bester (Hanover, ON).  Bester is one of the top seeded athletes in this competition and is playing on his adopted home turf.  Bester relocated to Australia to focus on his bowls development and is currently the Bowls Coordinator at Broadbeach Bowls Club.  Bester’s first match was against Kenneth McGreal from Isle of Man. Bester started off on fire, jumping to a 17-2 lead. McGreal fought his way back to make it 18-7 before Bester put the game to bed with a final score of 21-8.  Bester also made short work of his second opponent, Botswana’s John Gaborutwe, taking the game in a score of 21-4.  Men’s Singles is divided into four sections of six competitors with the top two advancing to the quarter-finals.  Point differentials will be used to seed the quarter-finals, meaning that the athletes want to win games by as great a margin as possible.

Westlake, Cooper, and Foster did not have much time to reflect on their fours competition as they were back on the greens at the end of the day competing in their first Triples match of the competition. The Canadian trio got right down to business and started the second half of their competition with a 19-15 victory over Fiji.

Day 6 of competition on the Gold Coast will see Leanne Chinery (Victoria, BC) and Kelly McKerihen take on Norfolk Island in Women’s Pairs and Lefresne, Wilson and Stadnyk with be joined by Ryan Stadnyk to face Wales in Men’s Fours.  Next up for Bester is Papua New Guinea’s Matu Bazo while the Women’s Triples will face powerhouse Australia.