Canadian Lawn Bowlers continued their push to the podium to make the Lawn Bowls playoffs at the 2018 Commonwealth Games with the Women’s Triples already through to the Semi-Finals and both Women’s Pairs and Men’s Singles advancing to quarter-final play. 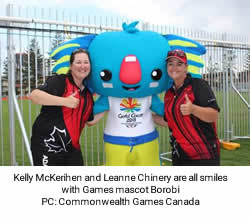 The women’s pairs team of Leanne Chinery (Victoria, BC) and Kelly McKerihen (Toronto, ON) battled New Zealand’s Val Smith and Jo Edwards in their third match. The Canadians came out of the gate slow, and found themselves down 7-2 after seven ends. McKerihen put the team on her back and picked up consecutive ends of 3 to change the game in their favour and take the lead 12-10 after thirteen ends. With a two-point lead, the Canadians dropped a 5 to go down 16-13 with two ends to go, but rebounded quickly to tie the game 16-16 going into the last end. McKerihen came up huge in the last end and, thanks to a close miss by Edwards, Canada grabbed two to win 18-16.

The final round robin game for Canada came against Tonga. A win would secure Canada’s place in the quarter-finals, while a loss would leave things up to fate. Knowing this, the Canadian duo decided to take matters into their own hands. In a steady performance, Chinery and McKerihen led 11-4 at the halfway mark. Despite a small pushback from Tonga, the Canadians surged forward and finished the game 20-12. With the win, the Canadian women’s pairs team claimed first place in their group and will face a #2 seed in the quarter-finals. 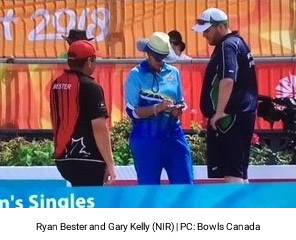 In the men’s singles, Ryan Bester (Hanover, ON) played his final round robin match against Northern Ireland’s Gary Kelly. Kelly came out aggressively, firing drives right from the get go, but Bester’s drawing was top notch. Throughout the game, Bester’s first bowl would prove to be absolutely deadly, and the Canuck had more touchers than you could count. Despite Bester’s deadly touch, Kelly managed to keep things close by playing through the head and crashing on Bester’s bowls. Never going away, Kelly forced Bester to keep his draw game sharp. The Ontario native did just that and came away with a 21-12 victory. With the win, Bester finishes first in the group and will face second seed Petrus Breitenbach of South Africa in the quarter-finals in the opening rounds of Day 8 of Competition. 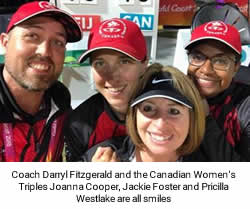 Despite a disappointing second day of competition which saw losses against Australia and Papua New Guinea, Women’s Triples lead Jackie Foster (Bridgetown, NS) wasn’t worried.  “You take away the positives from each game, chuck the rest, and build on that. That’s what we look to do tomorrow.” And build they did.

Skip Pricilla Westlake (Delta, BC), second Joanna Cooper (Calgary, AB), and Foster were in a must win situation over their final opponent in sectional play and they did not disappoint.  Their 19-10 victory over India secured them second spot in the group and a trip to the quarter-finals to face the New Zealand rink of Mandy Boyd, Katelyn Inch and Tayla Bruce.  Westlake, Inch and Bruce met recently in the 2018 World Youth Championships which were also held at Broachbeach in February.

In the quarter-finals, Canada trailed the New Zealand rink for the first four ends, but caught fire in the fifth when they scored a massive four points to take the lead for the first time in the game.  The Canadians would hold onto to that lead for the next eleven ends, rarely allowing the Blackjack trio to score more than a single.  In the 16th end, New Zealand struck back with a double to push them within striking range of a win with only two ends remaining in the game. The Canadians picked up a single in the 17th to push their lead to 18-15.  This would prove too much for the New Zealand rink who could only answer back with a single in the 18th end.  The final score of 18-16 for Canada secures the women a trip to the semi-finals where they will face the Scotland rink of Caroline Brown, Stacey McDougall and Kay Moran in the opening round of Day 8 of Competition.

Men’s Fours Fall to Strong New Zealand Rink in Sectional Play
The men’s fours team of Cameron Lefresne (Enfield, NS), Greg Wilson (Calgary, AB), Chris Stadnyk (Niagara Falls, ON), and Ryan Stadnyk (Niagara Falls, ON) faced an undefeated New Zealand rink in their third sectional game.  The Canadians came out of the gate strong with a five point end early in the game which saw them take the lead over NZ 6-3.  Trading points back and forth, the Canadians held their own throughout the first half of the game.  Scoring a five in the 8th end allowed the Kiwis to settle back into their stride in the second half where they would maintain their lead throughout the remainder of the game.  Final score 21-11 for New Zealand.

All four Canadian rinks will be back in action for the opening rounds of Day 8 (April 11th at 7:01 pm EDT in Canada).