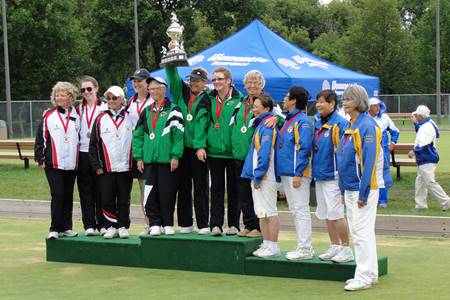 The women’s championship day was much like the rest of the week at the Canadian Championships in Winnipeg, it rained.  The women were set to play after the men had finish, but due to the torrential downpours the head umpire, Nick Watkins, made the call to start the women’s games before the men had finished.  Watkins didn’t expect the weather to improve and made the decision to move the games up for the safety of the players and spectators.  Despite the unpleasant conditions, the women played their hardest and three teams walked away Canadian Champions.

In the Women’s Pairs, it was the home province Manitoba A team who became Canadian Champions after a close 15-13 match against Ontario A team Erin Dorey and Michelle Whitehead.  Betty Van Wallenghem and Sandra Mulholland of Manitoba lead the women with an 8-1 record in the round robin.  Alberta B defeated Nova Scotia A for the bronze medal.

There were another two close matches in the finals of the Women’s Triples.  Alberta A, Claire Day, Amanda Berg and Val Wilson, defeated British Columbia, Mary Wright, Belle Chan and Anne Van Bastelaere by only one point to win the gold medal.  Saskatchewan A beat Manitoba A by two to clinch the bronze medal.  These four teams were close throughout the entire competition, with Alberta A and British Columbia both finishing the round robin with 14 points and Saskatchewan A and Manitoba A finishing tied with 13 points.

The Women’s Fours champions to be representing Canada at the 2015 Tiger Bowls and China Open is Saskatchewan A, including the youngest bowler in the competition Jordan Kos.  The other members of the team were Jean Roney, Clem Grant and Carolyn Jones.  Saskatchewan beat Ontario B, Kelly McKerihen, Laura Seed, Lisa McKerihen and Shirley Ko in the gold medal match; “[It was] a total team effort, everyone played their part” said team skip Jean Roney.  British Columbia walked away with the bronze medal over Manitoba A.

Full results of the Canadian Championships can be found at:
https://bowlscanada.com/en/championship/champ_canadian.html