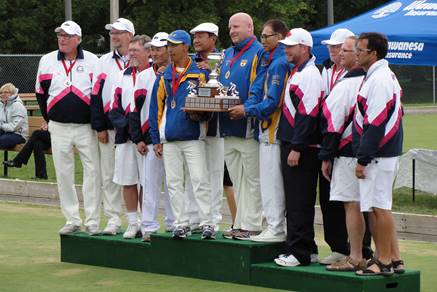 After six days of competition, nine round robin games and one medal game, our men’s winners have been crowned at the 2014 Canadian Championships in Winnipeg.

The winners in the Men’s Pairs event were Jonathan Braun and James MacGowan of British Columbia defeating Stan Nelson and Jeff Dobson of Alberta.  Braun and MacGowen went 7-2 in the round robin with one of those losses being to Nelson and Dobson in the first game of competition.  The home province, Manitoba A team was the winner of the bronze medal over Saskatchewan A.

In the Men’s Triples event it was Saskatchewan A, Keith Roney, Alex Scott and Grant Wilkie, who was victorious over Nova Scotia A, Ian MacDonald, Cameron Lefresne and Phil Balcom.  Saskatchewan had lost only one match throughout the competition and was the front-runner heading into the finals.  In the bronze medal game, it was the battle of Ontario where the A team walked away with the bronze medal.

The Men’s Fours final was a highlight for both fans and athletes.  The winning team of the men’s fours competition is invited to attend the 2015 Tiger Bowls and China Open tournament as the Canadian Champions.  British Columbia was successful in winning the Canadian Championship title and will go on to represent Canada while they compete overseas in China.  The British Columbia team, Cary Manns, Vince Mai, Kin On Lau and Clement Law, lost only one game in the round robin and continued the winning momentum into the finals beating the Alberta A team.  Alberta B nudged Saskatchewan in a close 18-16 victory to claim the bronze medal.

Full results of the Canadian Championships can be found at:
https://bowlscanada.com/en/championship/champ_canadian.html